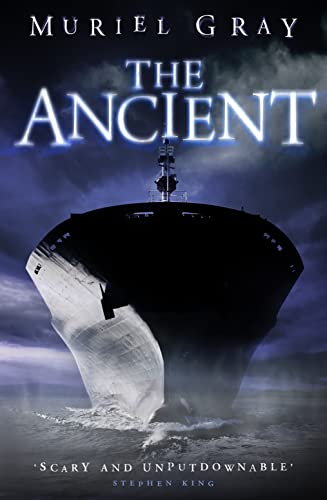 The Ancient
by Muriel Gray

Alien, on a container ship.
`Scary and unputdownable', Stephen King

The Ancient by Muriel Gray

Alien, on a container ship.
`Scary and unputdownable', Stephen King

Amongst towering mountains of trash in the backstreets of Lima, three young boys are trying to raise an ancient demon. They don't think their incantation has worked; but that night a teenage drugrunner is gunned down across their makeshift altar. As his killers walk away, his body stirs. Not because it still contains a spark of life. But because something is stirring beneath it...

Port Callao. The MV Lysicrates, a three-quarter-mile long supertanker, is being loaded with hundreds of tonnes of trash. Watching from the bridge, in a bleary state of hungover gloom, is second-in-command Matthew Cotton; more interesting is the arrival of a young American student who has missed the boat she should have been on.

They should have paid more attention to the trash.

With its powerful blend of superb characterisation and demonic horror, Muriel Gray's new novel is her best yet.

From the reviews of The Trickster and Furnace:
'The Trickster is written with incredible vigour... thuggish, gory, sentimental, cosy. It grips'
Daily Mail

'Gray tells her tale with immense elan. A smashing debut that's gutsier than most authors could ever be' Time Out

'Pacy, energetic, violent entertainment whose flashes of intuition and glittery neurosis give it an idiosyncratic edge' The Times

Muriel Gray was born in Glasgow in 1958, is a BA honours graduate in graphic design and illustration of the Glasgow School of Art, and worked as a professional illustrator before joining the National Museum of Antiquities in Edinburgh as assistant head of design.
She then moved into broadcasting starting as a presenter on Channel 4's seminal music programme The Tube, presenting all five series alongside Jools Holland and the late Paula Yates, whilst still retaining her post at the museum.
A full-time career spanning more than three decades in the media followed, presenting many diverse flagship network radio and television programmes, including: The Media Show, Frocks on The Box, Ride On, The Booker Prize Live, Start The Week, The John Peel Show, Bliss, The Munro Show, Art is Dead, Walkie Talkie, The Snow Show and many others, as well as producing, directing, and then founding her own award-winning production company which grew into the largest in Scotland.
She became a bestselling novelist with the publication of her debut horror novel, The Trickster, in 1995, and this was followed by Furnace in 1998 and The Ancient in 2001, which Stephen King hailed as being `scary and unputdownable'.
She is also known as a political opinion writer for Time Out magazine, The Sunday Correspondent, The Sunday Mirror, Scotland on Sunday, The Sunday Herald, and continues to contribute regularly to The Guardian and other publications. She has won several prizes for journalism including columnist of the year at the Scottish press awards.
Muriel is a former rector of Edinburgh University, still the only woman to have held this post, and has been awarded honorary degrees from the University of Abertay and Glasgow School of Art via Glasgow University. She is currently chair of the board of governors
at Glasgow School of Art, also the only woman to have held this post.
She lives in Glasgow with her husband and three children. Her greatest disappointment is that she has not yet been abducted by aliens.

GOR008231672
The Ancient by Muriel Gray
Muriel Gray
Used - Very Good
Paperback
HarperCollins Publishers
2015-12-03
300
0008158266
9780008158262
N/A
Book picture is for illustrative purposes only, actual binding, cover or edition may vary.
This is a used book - there is no escaping the fact it has been read by someone else and it will show signs of wear and previous use. Overall we expect it to be in very good condition, but if you are not entirely satisfied please get in touch with us.