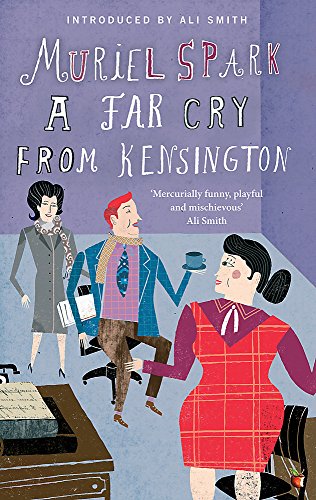 A Far Cry From Kensington
by Muriel Spark

A Far Cry From Kensington Summary

A Far Cry From Kensington by Muriel Spark

'I was in heaven reading this book. I think she writes like an angel . . . just blissful' Stephen Fry

A novel of 'pure delight' (Claire Tomalin) by the author of The Prime of Miss Jean Brodie.

When Mrs Hawkins tells Hector Bartlett he 'urinates frightful prose', little does she realise the repercussions. Holding that 'no life can be carried on satisfactorily unless people are honest' Mrs Hawkins refuses to retract her judgement, and as a consequence, loses not one, but two much-sought-after jobs in publishing. Now, years older, successful, and happily a far cry from Kensington, she looks back over the dark days that followed, in which she was embroiled in a mystery involving anonymous letters, quack remedies, blackmail and suicide.

With an introduction by Ali Smith.

'An outstanding novel ... A Far Cry From Kensington has an effortless, translucent grasp of the spirit of the period.' Observer

A Far Cry From Kensington Reviews

The divine Spark is shining at her brightest . . . Pure delight * Claire Tomalin, INDEPENDENT *
An outstanding novel . . . A FAR CRY FROM KENSINGTON has an effortless, translucent grasp of the spirit of the period * OBSERVER *
'Wonderfully entertaining - full of absurd, comical, engaging characters and written with typical wit, elegance and aplomb * SUNDAY TELEGRAPH *
One of Muriel Spark's most liberating, liberated and meditative novels. Spark is a writer who can take the meditative and make it mercurially funny, playful and mischievous * Ali Smith *

Muriel Spark, D.B.E, C. Litt, was born in Edinburgh in 1918. A poet and novelist, she also wrote children's books, radio plays, a comedy, 'Doctors of Philosophy', first performed in London in 1962, and biographies. She is best known for her stories and many successful novels, including Memento Mori, The Prime of Miss Jean Brodie, Loitering With Intent, The Comforters, A Far Cry from Kensington and The Public Image. For her long career of literary achievement, Muriel Spark won international praise and many awards, including the David Cohen British Literature Award, the T. S. Eliot Award, the Saltire Prize, the Boccaccio Prize for European Literature, the Gold Pen Award and the Italia Prize for dramatic radio. Muriel Spark was given an honorary doctorate of Letters from a number of universities, London, Edinburgh and Oxford among these. She died in 2006.

GOR001475066
A Far Cry From Kensington by Muriel Spark
Muriel Spark
Virago Modern Classics
Used - Very Good
Paperback
Little, Brown Book Group
2009-11-05
208
1844085511
9781844085514
N/A
Book picture is for illustrative purposes only, actual binding, cover or edition may vary.
This is a used book - there is no escaping the fact it has been read by someone else and it will show signs of wear and previous use. Overall we expect it to be in very good condition, but if you are not entirely satisfied please get in touch with us.