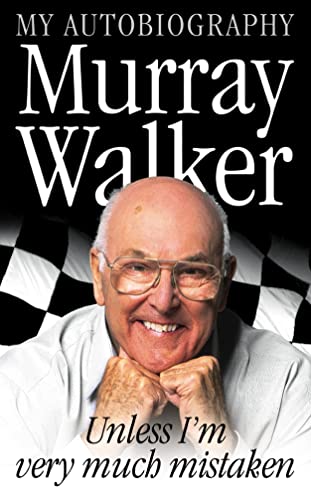 The voice of motor racing and much loved public figure - and the man responsible for introducing millions of viewers to the previously inaccessible world of Formula 1 - tells the story of his incident-packed life, with a brand new chapter on his globetrotting adventures since retirement.

The voice of motor racing and much loved public figure - and the man responsible for introducing millions of viewers to the previously inaccessible world of Formula 1 - tells the story of his incident-packed life, with a brand new chapter on his globetrotting adventures since retirement.

Murray Walker is a national treasure. When the man who made famous the catch phrase 'Unless I'm very much mistaken... I AM very much mistaken!!!' announced that he was retiring as ITV's Grand Prix commentator, the media reacted as if the sport itself was losing one of its biggest stars.

His reputation for mistakes was the making of Walker. He was the fan who happened to be given the keys to the commentary box - and never wanted to give them back. His high-octane delivery kept viewers on the edge of their seats, while his passion for talking about the sport he loved was matched by an all-encompassing knowledge gained through hours of painstaking research before every race.

In his book he writes about his childhood and the influence that his father, British motorcycle champion Graham Walker, had on his career. Failing to match his father's achievements on the track after active service in World War II, he made a successful career for himself in advertising which catapulted him to the top of his profession.

An offer from the BBC to take over the commentary seat for their F1 broadcasts was too good to turn down, and it wasn't long before the infamous 'Murrayisms' enlivened a sport which until then had been shrouded in a cloak of unfathomable technical jargon and mind-numbing statistics.

He also talks about the biggest changes in the sport over the last 50 years, in particular the safety issues which came to the fore after the tragic death of Ayrton Senna, which he witnessed first hand. His partnership with James Hunt behind the microphone is the subject of some hilarious anecdotes, while his views on drivers past and present such as Stirling Moss, Jackie Stewart, Damon Hill and Michael Schumacher make for fascinating reading.

`An entertaining read' The Sunday Times

Murray Walker was born in Birmingham in 1923. His father, Graham was a motorcycle TT champion and Walker jnr saw his first race when he was two. After active service in World War II, he forged a succeesful career as an advertising executive, handling the accounts of blue-chip firms such as Mars, Esso and the Co-op. His debut as a sports commentator came in 1949, when he covered the British GP at Silverstone for BBC Radio. He has since spent more than 50 years commentating on motor racing and in particular F1, initially for the BBC before switching to ITV in 1997. He is the author of 14 books on motor racing.

GOR000535786
Murray Walker: Unless I'm Very Much Mistaken by Murray Walker
Murray Walker
Used - Very Good
Paperback
HarperCollins Publishers
2003-06-02
496
0007126972
9780007126972
N/A
Book picture is for illustrative purposes only, actual binding, cover or edition may vary.
This is a used book - there is no escaping the fact it has been read by someone else and it will show signs of wear and previous use. Overall we expect it to be in very good condition, but if you are not entirely satisfied please get in touch with us.