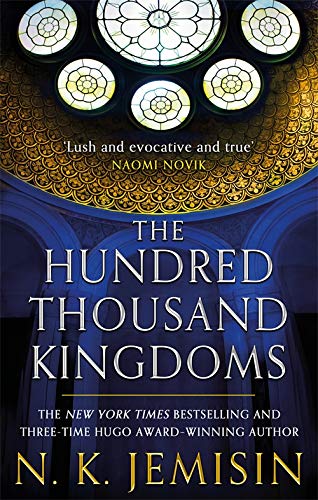 The Hundred Thousand Kingdoms: Book 1 of the Inheritance Trilogy by N. K. Jemisin


The debut novel from the double Hugo Award-winning N. K. Jemisin, author of The Fifth Season

Yeine Darr is an outcast from the barbarian north. But when her mother dies under mysterious circumstances, she is summoned to the majestic city of Sky - a palace above the clouds where gods' and mortals' lives are intertwined.
There, to her shock, Yeine is named one of the potential heirs to the king. But the throne of the Hundred Thousand Kingdoms is not easily won, and Yeine is thrust into a vicious power struggle with a pair of cousins she never knew she had. As she fights for her life, she draws ever closer to the secrets of her mother's death and her family's bloody history.
But it's not just mortals who have secrets worth hiding and Yeine will learn how perilous the world can be when love and hate - and gods and mortals - are bound inseparably.

The Inheritance Trilogy begins with The Hundred Thousand Kingdoms, continues in The Broken Kingdoms and concludes in The Kingdom of Gods.

Jemisin's first novel has a wistful, lyrical tone, and the intrigue - both romantic and political - is skillfully handled. Book one in the Inheritance Trilogy is sensitive, restrained high fantasy * Guardian *
A story that manages to be both fantastically grand and very personal. Definitely recommended * Waterstones Books Quarterly *
"A bold and strong new voice in fantasy fiction" Tricia Sullivan, Arthur C. Clarke Award-winning author

N. K. Jemisin is a Brooklyn-based author and the winner of three Hugo Awards for her novels The Fifth Season, The Obelisk Gate and The Stone Sky. She previously won the Locus Award for her first novel, The Hundred Thousand Kingdoms, and her short fiction and novels have been nominated multiple times for Hugo, World Fantasy and Nebula awards, and shortlisted for the Crawford and the James Tiptree, Jr. Awards. She is a science fiction and fantasy reviewer for the New York Times, and you can find her online at nkjemisin.com.

GOR002142134
The Hundred Thousand Kingdoms: Book 1 of the Inheritance Trilogy by N. K. Jemisin
N. K. Jemisin
Inheritance Trilogy
Used - Good
Paperback
Little, Brown Book Group
2010-02-01
448
1841498173
9781841498171
N/A
Book picture is for illustrative purposes only, actual binding, cover or edition may vary.
The book has been read but remains in clean condition. All pages are intact and the cover is intact. Some minor wear to the spine.