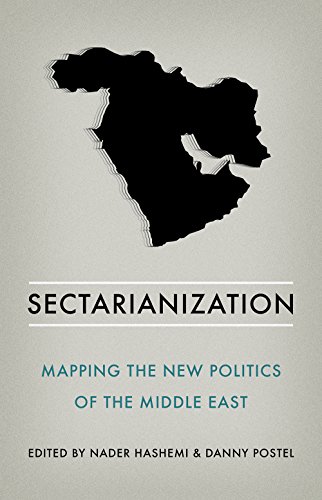 New Price
£19.99
Free Shipping in the UK
An anatomy of the increasing sectarianisation of conflicts in the Middle East, by some of the leading scholars writing on the region.
New£19.99

Sectarianization: Mapping the New Politics of the Middle East by Nader Hasheemi

As the Middle East descends ever deeper into violence and chaos, 'sectarianism' has become a catch-all explanation for the region's troubles. The turmoil is attributed to 'ancient sectarian differences', putatively primordial forces that make violent conflict intractable. In media and policy discussions, sectarianism has come to possess trans-historical causal power. This book trenchantly challenges the lazy use of 'sectarianism' as a magic-bullet explanation for the region's ills, focusing on how various conflicts in the Middle East have morphed from non-sectarian (or cross-sectarian) and nonviolent movements into sectarian wars. Through multiple case studies -- including Syria, Iraq, Lebanon, Saudi Arabia, Bahrain, Yemen and Kuwait -- this book maps the dynamics of sectarianisation, exploring not only how but also why it has taken hold. The contributors examine the constellation of forces -- from those within societies to external factors such as the Saudi-Iran rivalry -- that drive the sectarianisation process and explore how the region's politics can be de-sectarianised.Featuring leading scholars -- and including historians, anthropologists, political scientists and international relations theorists -- this book will redefine the terms of debate on one of the most critical issues in international affairs today.

'Why has sectarianism become such an urgent, destructive force in today's Middle East? This collection brings together a diverse group of scholars to advance a distinctively political explanation for the rise of sectarian conflict across the region. Rather than resort to essentialised identities, these essays expertly dissect the historical, political and instititutional contexts within which cynical political and social actors have mobilised sectarianism for their own ends. Every student of Middle East politics will benefit from reading and thinking hard about the implications of this collection.' * Marc Lynch, Professor of Political Science, George Washington University, Director of the Project on Middle East Political Science, and author of The New Arab Wars: Anarchy and Uprising in the Middle East *
'Sectarianization brings together a group of fine scholars to interrogate what has become a new Orientalist orthodoxy vis-a-vis the Middle East. The rigorous historical and socio-political analyses in the book make it clear that the astonishing sectarian conflicts in today's Middle East have little to do with any ancient primordial loyalties, but are rooted in the contemporary geopolitics of the region. Sectarianization is an indispensable read for these bleak times.' * Asef Bayat, Catherine & Bruce Bastian Professor of Global and Transnational Studies and Professor of Sociology at the University of Illinois, Urbana-Champaign *
'The master narrative that everything in the Middle East is explained by religious fanaticism has a long history in the West. Paradoxically, in our own era it has, if anything, become more inescapable than it was in the day of Martin Luther, despite the proliferation of social science about the region in the Western academy. Hashemi and Postel do an enormous service by bringing together in one volume a mass of research knocking down the 'sectarianism thesis.' It is essential for anyone who wants truly to understand this crucial region.' * Juan Cole, Richard P. Mitchell Collegiate Professor of History at the University of Michigan *
'A possible paradigm shift in the explanatory efficacy of of sectarianism as a static category and catch-all reason for conflict in the Middle East.'
'A major contribution.'

NGR9781849047029
Sectarianization: Mapping the New Politics of the Middle East by Nader Hasheemi
Nader Hasheemi
New
Paperback
C Hurst & Co Publishers Ltd
2017-02-20
320
1849047022
9781849047029
N/A
Book picture is for illustrative purposes only, actual binding, cover or edition may vary.
This is a new book - be the first to read this copy. With untouched pages and a perfect binding, your brand new copy is ready to be opened for the first time.