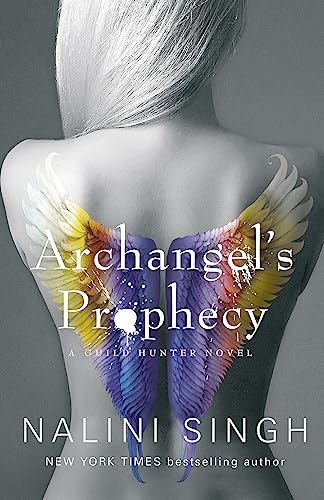 Midnight and dawn, Elena's wings are unique among angelkind . . . and now they're failing. The first mortal to be turned into an immortal in angelic memory, she's regressing. Becoming more and more human. Easier to hurt. Easier to kill.

Elena and Raphael must unearth the reason for the regression before it's too late, and Elena falls out of the sky. Yet even as they fight a furious battle for Elena's very survival, violent forces are gathering in New York and across the world.

In China, the Archangel Favashi is showing the first signs of madness. In New York, a mysterious sinkhole filled with lava swallows a man whole. In Africa, torrential monsoon rains flood rolling deserts. And in Elena's mind whispers a haunting voice that isn't her own.

This time, survival may not be possible . . . not even for the consort of an archangel.

Praise for the GUILD HUNTER novels:

I devour Guild Hunter novels. I can't get enough of this epic world. Full of danger, intrigue, and heady seduction, the Guild Hunter series is perfect! -- Sylvia Day, #1 international bestselling author
This is without a doubt one of my all-time favourite series, from the minute I pick up one of the books until the very last page I'm completely and utterly absorbed in the world and the characters and I never want the journey to end * Feeling Fictional *
Singh is one of those rare storytellers who literally never disappoints! * Romantic Times *
Graceful strength, wild beauty, predatory intelligence . . . These things are at the heart of every Nalini Singh Guild Hunter story * Grave Tells *
Nalini Singh continues to show her gift at compelling world-building and characterization * Romance Junkies *

GOR009744933
Archangel's Prophecy: Guild Hunter Book 11 by Nalini Singh
Nalini Singh
The Guild Hunter Series
Used - Very Good
Paperback
Orion Publishing Co
2018-10-30
384
1473224578
9781473224575
N/A
Book picture is for illustrative purposes only, actual binding, cover or edition may vary.
This is a used book - there is no escaping the fact it has been read by someone else and it will show signs of wear and previous use. Overall we expect it to be in very good condition, but if you are not entirely satisfied please get in touch with us.