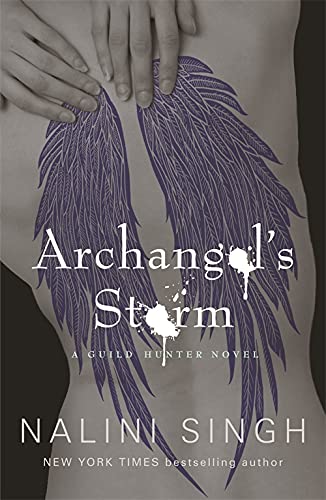 Rich, dark, sumptuous and evocative ... bestselling author Nalini Singh is back with a stunning new tale in her deadly, beautiful world where angels rule and vampires serve.

With wings of midnight and an affinity for shadows, Jason courts darkness. But now, with the Archangel Neha's consort lying murdered and her rage threatening cataclysmic devastation, Jason steps into the light, knowing he must unearth the murderer before it is too late.

Earning Neha's trust comes at a price - Jason must tie himself to her bloodline through the Princess Mahiya, a woman with secrets so dangerous, she trusts no one. Least of all an enemy spymaster.

With only their relentless hunt for a violent, intelligent killer to unite them, Jason and Mahiya embark on a quest that leads to a centuries-old nightmare ... and to the dark storm of an unexpected passion that threatens to drench them both in blood.

GOR010085660
Archangel's Storm: Book 5 by Nalini Singh
Nalini Singh
The Guild Hunter Series
Used - Like New
Paperback
Orion Publishing Co
2012-09-11
352
0575119497
9780575119499
N/A
Book picture is for illustrative purposes only, actual binding, cover or edition may vary.
The book has been read, but looks new. The book cover has no visible wear, and the dust jacket is included if applicable. No missing or damaged pages, no tears, possible very minimal creasing, no underlining or highlighting of text, and no writing in the margins.