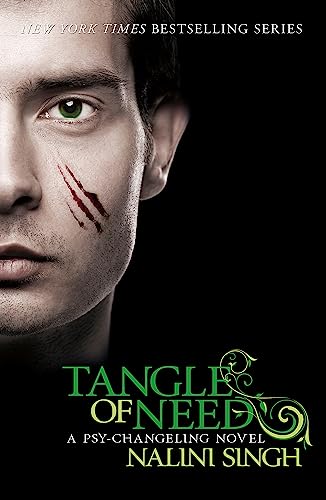 Tangle of Need
by Nalini Singh

In Stock
£2.99
Discover the exhilaration of breathtaking passion in the new Psy-Changeling novel by Nalini Singh.
Very Good Good Well Read
Only 3 left

Adria, wolf changeling and resilient soldier, has made a break with the past. Now comes a new territory, and a devastating new complication: Riaz, a SnowDancer lieutenant already sworn to someone else.

For Riaz, the primal attraction he feels for Adria is a staggering betrayal. For Adria, his dangerous lone-wolf appeal is beyond sexual. It consumes her. It terrifies her. It threatens to undermine everything she has built of her new life. But fighting their wild compulsion toward one another proves a losing battle.

Their coming together is an inferno ... and a melding of two wounded souls who promise each other no commitment, no ties, no bonds. Only pleasure. Too late, they realise that they have more to lose than they ever imagined. Drawn into a cataclysmic Psy war that may alter the fate of the world itself, they must make a decision that might just break them both.

GOR004426229
Tangle of Need: Book 11 by Nalini Singh
Nalini Singh
The Psy-Changeling Series
Used - Very Good
Paperback
Orion Publishing Co
2012-12-11
432
0575100168
9780575100169
N/A
Book picture is for illustrative purposes only, actual binding, cover or edition may vary.
This is a used book - there is no escaping the fact it has been read by someone else and it will show signs of wear and previous use. Overall we expect it to be in very good condition, but if you are not entirely satisfied please get in touch with us.