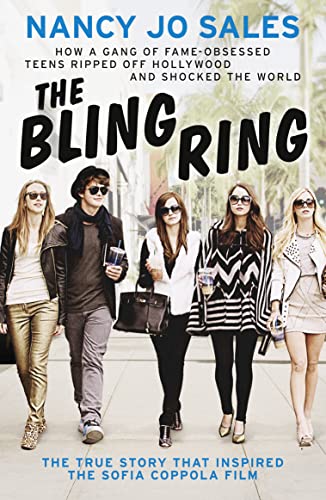 Published alongside the 2013 film The Bling Ring, directed by Sofia Coppola and starring Emma Watson, this is the explosive true story of the seven celebrity-obsessed teens who became the most audacious burglary gang in Hollywood history.

The Bling Ring: How a Gang of Fame-obsessed Teens Ripped off Hollywood and Shocked the World by Nancy Jo Sales

Published alongside the 2013 film The Bling Ring, directed by Sofia Coppola and starring Emma Watson, this is the explosive true story of the seven celebrity-obsessed teens who became the most audacious burglary gang in Hollywood history.

It's 19 September 2010, and 21-year-old Rachel Lee has emerged from Los Angeles Superior Court, having just been sentenced to four years behind bars.

A few months earlier, she had been running the Bling Ring: a gang of rich, beautiful, wild-living Valley teens who idolised celebrity, designer labels and luxury brands. Who, in 2009, became the most audacious thieves in recent Hollywood history.

In a case that has shocked the nation, the seven schoolfriends stole millions of dollars' worth of clothing, jewellery and possessions from the sprawling mansions of Paris Hilton, Lindsay Lohan and Orlando Bloom, among others - using gossip websites, Google Earth and Twitter to aid their crimes.

But what made these kids - all of whom already enjoyed designer clothes, money, cars and social status - gamble with their lives at such high stakes?

Journalist Nancy Jo Sales, the author of Vanity Fair's acclaimed expose of the Bling Ring, gained unprecedented access to the group to answer that question. In the process she uncovered a world of teenage greed, obsession, arrogance and delusion that surpassed her wildest expectations.

Now, for the first time, Sales tells their story in full. Publishing to tie into Sofia Coppola's film of the same name, this is a fascinating look at the dark and seedy world of the real young Hollywood.

`For a satire on America's modern day celebrity culture, The Bling Ring is hard to beat.' The Guardian

`With its depth of insight into extremes of shallowness, and its human scale, reads like a minor classic of our times.' The Observer

Nancy Jo Sales is an award-winning journalist whose acclaimed Vanity Fair piece, `The Suspects Wore Louboutins', forms the basis for the Sofia Coppola film The Bling Ring, starring Emma Watson. The film, for which Nancy Jo acted as a consultant, is due for release in 2013.

Sales has written for Vanity Fair, The New York Times Magazine, Harper's Bazaar, Vibe and People, among many other publications. She lives in New York City.

GOR004711209
The Bling Ring: How a Gang of Fame-obsessed Teens Ripped off Hollywood and Shocked the World by Nancy Jo Sales
Nancy Jo Sales
Used - Very Good
Paperback
HarperCollins Publishers
2013-05-23
288
0007518226
9780007518227
N/A
Book picture is for illustrative purposes only, actual binding, cover or edition may vary.
This is a used book - there is no escaping the fact it has been read by someone else and it will show signs of wear and previous use. Overall we expect it to be in very good condition, but if you are not entirely satisfied please get in touch with us.