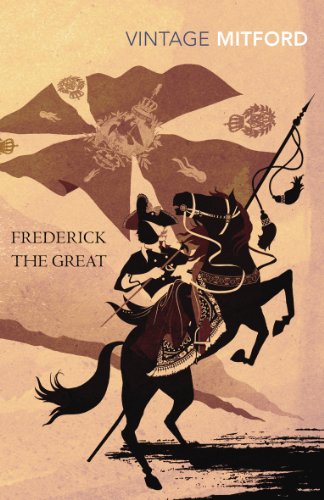 Frederick the Great
by Nancy Mitford

In Stock
£8.99
WITH AN INTRODUCTION BY KATE WILLIAMSFrederick II of Prussia attempted to escape his authoritarian father as a boy, but went on to become one of history's greatest rulers. Nancy Mitford brings all these contradictions and achievements to sparkling life in an fascinating, intimate biography.
Very Good Good
Only 1 left

Frederick the Great by Nancy Mitford

WITH AN INTRODUCTION BY KATE WILLIAMS Frederick II of Prussia attempted to escape his authoritarian father as a boy, but went on to become one of history's greatest rulers. He loved the flute, and devoted hours of study to the arts and French literature, forming a long-lasting but turbulent friendship with Voltaire. He was a military genius and enlarged the borders of his empire, but he also promoted religious tolerance, economic reform and laid the foundation for a united Germany. Nancy Mitford brings all these contradictions and achievements to sparkling life in an fascinating, intimate biography.

"He is everything I like, brave, funny, no nonsense, marvellous taste, common sense, interested in everything" -- Nancy Mitford on Frederick II of Prussia
"The unmistakable Mitford trill, in whose light, bright cadences an entire hard-to-shock and easy-to-bore view of life is made manifest" -- Zoe Heller * Daily Telegraph *
"Elegant and entertaining" * Chicago Tribune *
"Witty and atmospheric" * Sunday Times *
"[Her books] have the air of having been talked on to the page, in a voice as direct and intimate and clear as a child's" -- Laura Thompson * Daily Telegraph *

Nancy Mitford was born in London on November 28 1904, daughter of the second Baron Redesdale, and the eldest of six girls. Her sisters included Lady Diana Mosley; Deborah, Duchess of Devonshire and Jessica, who immortalised the Mitford family in her autobiography Hons and Rebels. The Mitford sisters came of age during the Roaring Twenties and wartime in London, and were well known for their beauty, upper-class bohemianism or political allegiances. Nancy contributed columns to The Lady and the Sunday Times, as well as writing a series of popular novels including The Pursuit of Love and Love in a Cold Climate, which detailed the high-society affairs of the six Radlett sisters. While working in London during the Blitz, Nancy met and fell in love with Gaston Palewski, General de Gaulle's chief of staff, and eventually moved to Paris to be near him. In the 1950s she began writing historical biographies - her life of Louis XIV, The Sun King, became an international bestseller. Nancy completed her last book, Frederick the Great, before she died of Hodgkin's disease on 30 June 1973.

GOR003860547
Frederick the Great by Nancy Mitford
Nancy Mitford
Used - Very Good
Paperback
Vintage Publishing
2011-10-06
272
009952886X
9780099528869
N/A
Book picture is for illustrative purposes only, actual binding, cover or edition may vary.
This is a used book - there is no escaping the fact it has been read by someone else and it will show signs of wear and previous use. Overall we expect it to be in very good condition, but if you are not entirely satisfied please get in touch with us.