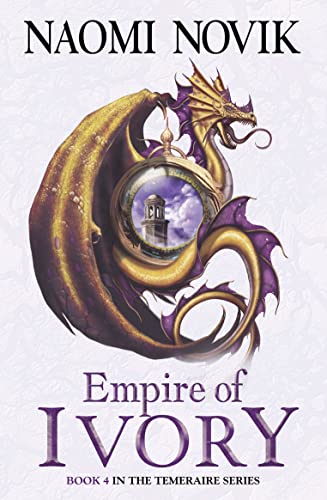 Empire of Ivory
by Naomi Novik

Empire of Ivory (The Temeraire Series, Book 4) by Naomi Novik

Laurence and Temeraire made a daring journey across vast and inhospitable continents to bring home a rare Turkish dragon from the treacherous Ottoman Empire.

Kazilik dragons are firebreathers, and Britain is in greater need of protection than ever, for while Laurence and Temeraire were away, an epidemic struck British shores and is killing off her greatest defence - her dragon air force is slowly dying.

The dreadful truth must be kept from Napoleon at all costs. Allied with the white Chinese dragon, Lien, he would not hestitate to take advantage of Britain's weakness and launch a devasting invasion.

Hope lies with the only remaining healthy dragon - Temeraire cannot stay at home, but must once again venture into the unknown to help his friends and seek out a cure in darkest Africa.

`Novik won me over with her first novel. the combination of military history, sympathetic characters, and engaging style makes this series great, intelligent fun'
The Times

'In the best tradition of fantasy, historical fiction and nautical novels'
Guardian

GOR001246871
Empire of Ivory (The Temeraire Series, Book 4) by Naomi Novik
Naomi Novik
The Temeraire Series
Used - Very Good
Paperback
HarperCollins Publishers
2008-03-03
400
0007256744
9780007256747
N/A
Book picture is for illustrative purposes only, actual binding, cover or edition may vary.
This is a used book - there is no escaping the fact it has been read by someone else and it will show signs of wear and previous use. Overall we expect it to be in very good condition, but if you are not entirely satisfied please get in touch with us.