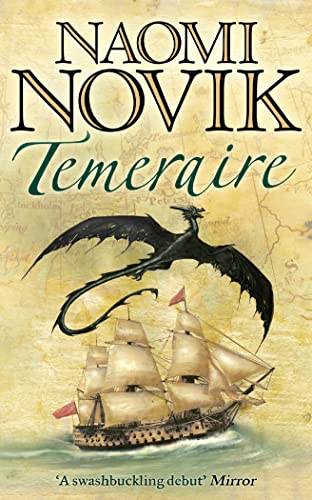 Naomi Novik's stunning series of novels follow the adventures of Captain William Laurence and his fighting dragon Temeraire as they are thrown together to fight for Britain during the turbulent time of the Napoleonic Wars.

Naomi Novik's stunning series of novels follow the adventures of Captain William Laurence and his fighting dragon Temeraire as they are thrown together to fight for Britain during the turbulent time of the Napoleonic Wars.

Captain Will Laurence has been at sea since he was just twelve years old; finding a warmer berth in Nelson's navy than any he enjoyed as the youngest, least important son of Lord Allendale. Rising on merit to captain his own vessel, Laurence has earned himself a beautiful fiancee, society's esteem and a golden future. But the war is not going well. It seems Britain can only wait as Napoleon plans to overrun her shores.

After a skirmish with a French ship, Laurence finds himself in charge of a rare cargo: a dragon egg bound for the Emperor himself. Dragons are much prized: properly trained, they can mount a fearsome attack from the skies. One of Laurence's men must take the beast in hand and join the aviators' cause, thus relinquishing all hope of a normal life.

But when the newly-hatched dragon ignores the young midshipman Laurence chose as its keeper and decides to imprint itself on the horrified captain instead, Laurence's world falls apart. Gone is his golden future: gone his social standing, and soon his beautiful fiancee, as he is consigned to be the constant companion and trainer of the fighting dragon Temeraire...

'I took a jaundiced view of dragon books until Novik won me over with her first novel. The combination of military history, sympathetic characters, and engaging style makes this series great, intelligent fun.
The Times

`These are beautifully written novels, not only fresh, original and fast-paced, but full of wonderful characters with real heart.'
Peter Jackson

`Throne of Jade is even better. Rather than repeat the formula (enjoyable though it was), Novik offers a plot laced with political intrigue and takes her characters to China, where interesting questions are raised amid their exciting adventures.'
The Times

"Temeraire" is a terrifically entertaining fantasy novel. Is it hard to imagine a cross between Susanna Clarke, of Norrell and Strange fame, and the late Patrick O'Brian? Not if you've read this wonderful, arresting novel.' Stephen King

'In the best tradition of fantasy, historical fiction and nautical novels.'
Guardian

Naomi lives in New York City with her husband and six computers. Her website and livejournal are at An avid reader of fantasy literature since age six, Naomi Novik is also a history buff with a particular fascination with the Napoleonic era and a fondness for the work of Patrick O'Brian and Jane Austen. She began writing as a guilty pleasure while studying for her Master's degree in Computer Science at Columbia. She found an opportunity to combine her passions by developing computer games, starting with a multi-player online science fiction game she created in college that has now been in continuous operation for almost a decade. She is also the founder and organizer of Vividcon, the annual convention for digital video enthusiasts who create music videos and other short films based on their favorite television shows and movies, and of the Commonverse, a project dedicated to applying the "open source" approach for software development to the writing of shared-universe fiction. She lives with her husband in New York City.

GOR000992430
Temeraire (The Temeraire Series, Book 1) by Naomi Novik
Naomi Novik
The Temeraire Series
Used - Very Good
Paperback
HarperCollins Publishers
2006-08-07
448
0007219113
9780007219117
N/A
Book picture is for illustrative purposes only, actual binding, cover or edition may vary.
This is a used book - there is no escaping the fact it has been read by someone else and it will show signs of wear and previous use. Overall we expect it to be in very good condition, but if you are not entirely satisfied please get in touch with us.