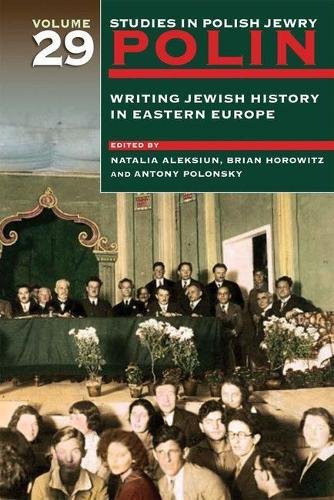 In Stock
£18.99
Even today, east European Jewish historiography revisits many of the questions of importance to scholars and audiences since its emergence: how Jews lived, both within the narrow Jewish world and in contact with the wider society;
Like New
Only 1 left

Historiography formed an unusually important component of the popular culture and heritage of east European Jewry in the late nineteenth and early twentieth centuries. This was a period of social, economic, and political upheaval, and for the emerging class of educated Jews the writing and reading of Jewish history provided not only intellectual but also emotional and moral sustenance. Facing an insecure future became easier with an understanding of the past, and of the Jewish place in that past. This volume is devoted to the development of Jewish historiography in the three east European centres-Congress Poland, the Russian empire, and Galicia-that together contained the majority of world Jewry at that time. Drawing widely on the multilingual body of scholarly and popular literature that emerged in that turbulent environment, the contributors to this volume attempt to go beyond the established paradigms in the study of Jewish historiography, and specifically to examine the relationship between the writing of Jewish history and of non-Jewish history in eastern Europe. In doing so they expose the tension between the study of the Jewish past in a communal setting and in a wider, regional, setting that located Jews firmly in the non-Jewish political, economic, and cultural environment. They also explore the relationship between 'history'-seen as the popular understanding of the past-and 'scholarly history'-interpretation of the past through the academic study of the sources, which lays claim to objectivity and authority. The development of Jewish historical scholarship grew out of the new intellectual climate of the Haskalah, which encouraged novel modes of thinking about self and others and promoted critical enquiry and new approaches to traditional sources. At the same time, however, in response to what the traditionalists perceived as secular research, an Orthodox historiography also emerged, driven not only by scholarly curiosity but also by the need to provide a powerful counterweight in the struggle against modernity. In fact, east European Jewish historiography has undergone many methodological, thematic, and ideological transformations over the last two centuries. Even today, east European Jewish historiography revisits many of the questions of importance to scholars and audiences since its emergence: how Jews lived, both within the narrow Jewish world and in contact with the wider society; the limits of Jewish insularity and integration; expressions of persecution and anti-Jewish violence; and also Jewish contributions to the societies and states of eastern Europe. Many challenges still remain: questions of the purpose of the research, its ideological colouring, and its relevance for contemporary Jewish communities. The fruit of research in many disciplines and from different methodological points of view, this volume has much to offer scholars of modern Jewry trying to understand how east European Jews saw themselves as they struggled with the concepts of modernity and national identity and how their history continues to be studied and discussed by an international community of scholars.

Natalia Aleksiun is Professor of Modern Jewish History at Touro College, Graduate School of Jewish Studies, New York. She is the co-editor, with Antony Polonsky and Brian Horowitz, of 'Writing Jewish History in Eastern Europe' (2016), and has published widely on Polish Jewish issues. Among several prestigious fellowships, she has been a fellow at the Institute of Contemporary History in Munich and at the Wiesenthal Institute for Holocaust Studies in Vienna, and the Pearl Resnick Postdoctoral Fellow at the Center for Advanced Holocaust Studies, US Holocaust Memorial Museum, Washington DC. Brian Horowitz is Sizeler Family Chair Professor of Jewish Studies at Tulane University. Antony Polonsky is Professor Emeritus of Holocaust Studies at Brandeis University and Chief Historian of the Polin Museum of the History of Polish Jews, Warsaw. He is the author of the three-volume History of the Jews in Poland and Russia, published in an abridged paperback version as The Jews in Poland and Russia: A Short History.

Notes on the Contributors
Index

GOR010429098
Polin: Studies in Polish Jewry Volume 29: Writing Jewish History in Eastern Europe by Natalia Aleksiun
Natalia Aleksiun
Polin: Studies in Polish Jewry
Used - Like New
Paperback
Liverpool University Press
2016-12-29
520
1906764484
9781906764487
N/A
Book picture is for illustrative purposes only, actual binding, cover or edition may vary.
The book has been read, but looks new. The book cover has no visible wear, and the dust jacket is included if applicable. No missing or damaged pages, no tears, possible very minimal creasing, no underlining or highlighting of text, and no writing in the margins.