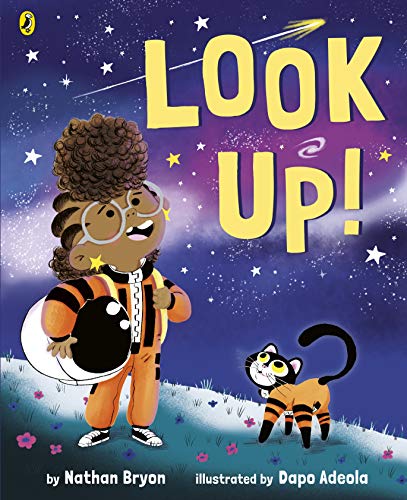 Look Up! by Nathan Bryon

Look Up! by Nathan Bryon

Meet hilarious, science-mad chatterbox, Rocket - she's going to be the greatest astronaut, star-catcher, space-traveller that has ever lived!

But... can she convince her big brother to stop looking down at his phone and start LOOKING UP at the stars?

Bursting with energy and passion about science and space, this heart-warming, inspirational picture book will have readers turning off their screens and switching on to the outside world.

*Shortlisted for the Sainsbury's Children's Book Awards 2019*
"Outstanding - a breath of fresh air, just like Rocket herself" - Kirkus Reviews
"Energetic and with a wry, sweet take on family dynamics, it will alert readers to the mysteries of the night skies" - The Guardian

Look Up! by Nathan Bryon and Dapo Adeola features science-crazed chatterbox Rocket, who is determined to get her whole town out watching a meteor shower - to the annoyance of her big brother, who would rather stay glued to his phone. Energetic and with a wry, sweet take on family dynamics, it will alert readers to the mysteries of the night skies. -- Imogen Russell Williams * The Guardian *

Rocket wants to be the greatest astronaut, star-catcher and space-traveller who has ever lived, just like Mae Jemison, the first African-American woman in space.
She's so excited about seeing a meteor shower that she makes an announcement over the supermarket loudspeaker when the cashier isn't looking, and hands out flyers to her fellow shoppers, much to her older brother Jamal's disdain - after all, Jamal prefers to be looking down at his phone most of the time and not up at the stars. And when Jamal gets too into his gaming to take Rocket to the park to watch the meteor shower, what will she do? Fortunately a knock at the door provides a joyous solution...
Nathan Bryon and Dapo Adeola's charming picture book gifts us with a gorgeous character in Rocket, a girl whose passion for all things space is as inspiring to the reader as her heroine Mae Jemison is to her. Adeola has a real talent for portraying expression, from teen Jamal's sulks to Rocket's jubilation at watching the stars.
Sprinkled with facts about meteors and space, this charming picture book is also a lovely representation of family, sibling relationships and one girl's infectious enthusiasm.

* Booktrust *
Young Rocket, an admirer of astronaut Mae Jemison, never stops telling others to "Look up!" Named for a rocket that blasted into space on the day she was born, Rocket is preparing herself to be the "greatest astronaut, star catcher, space walker who has ever lived." She sets up her telescope each night to wish on a star, her everyday clothing choice is an astronaut suit, star earrings are her favorites, and she has lots of information for those around her, especially concerning the Phoenix meteor shower to be visible that night. Her first-person commentary describes her family, her passion for space, and informs anyone who will listen about the Earth's travel through a comet's trail of dust. A multiethnic cast of characters with expressive cartoon faces fill this brightly colorful book with strong contrasts between indoor and outdoor images, variation of fonts, and speech or thought bubbles. All leads to the night sky event, when a frustrating sky search for the meteor awakens self-absorbed brother Jamal who finally turns off his phone to "Look up!" and give a bit of encouragement to his younger sister. VERDICT Ideal for space or science-inclined readers, this book includes brief information about outstanding scientist Jemison and a short list of facts about meteors and comets enclosed in an embrace of family relationships and a child's joy in the world around her. A suggested first purchase for all libraries. * School Library Journal STARRED REVIEW *
Rocket is on a mission...to get her angst-y teen brother to put down his cellphone and look up. An aspiring astronaut, Rocket makes it a point to set up her telescope and gaze at the stars every night before bedtime. Inspired by Mae Jemison, Rocket, a supercute black girl with braids and a coiffed Afro, hopes to be "the greatest astronaut, star catcher, and space walker who has ever lived." As the night of the Phoenix meteor shower approaches, Rocket makes fliers inviting everyone in her neighborhood to see the cosmic event at the park. Over the course of her preparations, she shares information about space-shuttle missions, what causes a meteor shower, and when is the best time to see one. Jamal, Rocket's insufferable older brother, who sports a high-top fade and a hoodie, is completely engrossed in his phone, even as just about everybody in the neighborhood turns up. The bright, digital illustrations are an exuberant celebration of both space and black culture that will simultaneously inspire and ground readers. That the main characters are unapologetically black is made plain through myriad details. Rocket's mother is depicted cornrowing her daughter's hair with a wide-toothed comb and hair oil. Gap-toothed Rocket, meanwhile, makes her enthusiasm for space clear in the orange jumpsuit both she and her cat wear-and even Jamal's excited by the end. Outstanding-a breath of fresh air, just like Rocket herself. * Kirkus Reviews STARRED REVIEW *

Nathan Bryon (Author)
Nathan Bryon is an award-winning writer and actor who has written for BAFTA award-winning children's TV shows, such as Swashbuckle and Apple Tree House and critically-acclaimed Rastamouse. A rising star in the world of screenwriting, his animated series, Afro Kid, is currently under option. Look Up! is his debut picture book for children.

GOR009860367
9780241345849
0241345847
Look Up! by Nathan Bryon
Nathan Bryon
Used - Very Good
Paperback
Penguin Random House Children's UK
2019-06-13
32
N/A
Book picture is for illustrative purposes only, actual binding, cover or edition may vary.
This is a used book - there is no escaping the fact it has been read by someone else and it will show signs of wear and previous use. Overall we expect it to be in very good condition, but if you are not entirely satisfied please get in touch with us
Trustpilot