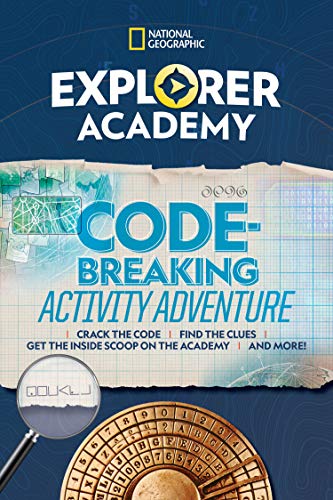 Unlock ancient puzzles and secrets introduced via supercool codes and cyphers in this this companion book to the new Explorer Academy series.

Unlock ancient puzzles and secrets introduced via supercool codes and cyphers in this this companion book to the new Explorer Academy series.

In the first activity book based on the new Explorer Academy series, kids test their knowledge of ancient codes and cyphers in a series of head-scratching puzzles designed to outwit even the most clever cryptographers. When they successfully navigate the codes, they are rewarded with a first-class tour of the Academy.

Kids will have a blast, teaming up with the characters from the series and learning firsthand from the world's most renowned scientists, explorers, conservationists, photographers, and journalists. It's a far-flung adventure, too, traveling to historic and majestic locations around the globe.

"My son loves these books. We started reading National Geographic Kids books when he was about six (he's nine now) and I can honestly say that these books have been instrumental in teaching him to read." - Consumer

"My kids love these books. Super fun and interesting." - Consumer

The National Geographic Kid is curious about the world around them, empowered in the face of challenges and responsible for others and the natural world. Combining these principles with the international educational heritage of Collins, this partnership is a natural fit for books that are funny, weird, exploratory, educational and loved by children.

GOR010315838
9781426333071
1426333072
Explorer Academy Codebreaking Adventure 1 by National Geographic Kids
National Geographic Kids
Used - Very Good
Paperback
National Geographic Kids
2019-05-16
128
N/A
Book picture is for illustrative purposes only, actual binding, cover or edition may vary.
This is a used book - there is no escaping the fact it has been read by someone else and it will show signs of wear and previous use. Overall we expect it to be in very good condition, but if you are not entirely satisfied please get in touch with us
Trustpilot