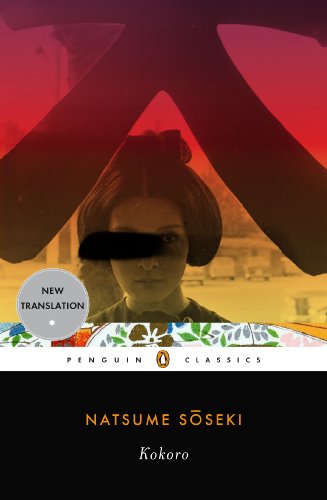 Deals with the friendship between a young man and an enigmatic elder whom he calls Sensei.

Kokoro, meaning 'heart', is a tantalising novel about the friendship between a young man and an enigmatic elder whom he calls Sensei. Set in the early twentieth century, when the death of the emperor Meiji gave way to a new era in Japanese politicial and cultural life, the novel enacts the transition from one generation to the next in the dynamic between Sensei, who is haunted by mysterious events in his past, and the unnamed young man, one of the new generation's elite who will inherit the coming era.
"This elegant novel...suffuses the reader with a sense of old Japan." --Los Angeles Times

Natsume Soseki (1867-1916), one of Japan's most influential modern writers, is widely considered the foremost novelist of the Meiji era (1868-1914). Born Natsume Kinnosuke in Tokyo, he graduated from Tokyo University in 1893 and then taught high school English. He went to England on a Japanese government scholarship, and when he returned to Japan he lectured on English literature at Tokyo University and began his writing career with the novel Botchan. Numerous nervous disorders forced him to give up teaching in 1908, and he became a full-time writer. He wrote fourteen novels, including I Am A Cat and Kusamakura, as well as haiku, poems in the Chinese style, academic papers on literary theory, essays, autobiographical sketches, and fairy tales. His work enjoyed wide popularity in his lifetime and secured him a permanent place in Japanese literature.

Meredith McKinney holds a PhD in medieval Japanese literature from the University in Canberra, where she teaches in the Japan Centre. She lived and taught in Japan for twenty years and now lives near Braidwood, New South Wales. Her other translations include Ravine and Other Stories, The Tale of Saigyo, and for Penguin Classics, The Pillow Book of Sei Shonagon and Kusamakura.

GOR005413414
9780143106036
0143106031
Kokoro by Natsume Soseki
Natsume Soseki
Used - Well Read
Paperback
Penguin Books Ltd
2010-05-06
256
N/A
Book picture is for illustrative purposes only, actual binding, cover or edition may vary.
This is a used book. We do our best to provide good quality books for you to read, but there is no escaping the fact that it has been owned and read by someone else previously. Therefore it will show signs of wear and may be an ex library book
Trustpilot