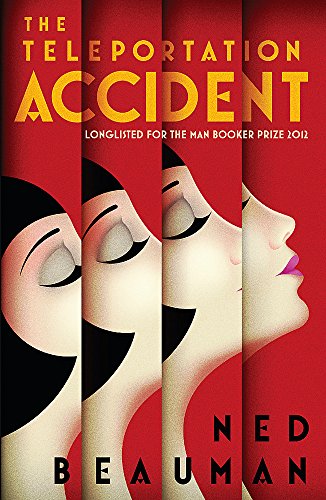 The Teleportation Accident
by Ned Beauman

From the award-winning Ned Beauman, an 'unquestionably brilliant' (TLS) novel that establishes him as one of the exciting and influential voices in modern British fiction.

The Teleportation Accident by Ned Beauman

LONGLISTED FOR THE 2012 MAN BOOKER PRIZE

AN OBSERVER BOOK OF THE YEAR

A DAILY TELEGRAPH BOOK OF THE YEAR

AN EVENING STANDARD BOOK OF THE YEAR

The fantastically inventive, ingenious and hilarious second novel from Ned Beauman, author of the acclaimed and prizewinning BOXER, BEETLE.

HISTORY HAPPENED WHILE YOU WERE HUNGOVER

When you haven't had sex in a long time, it feels like the worst thing
that could ever happen to anyone.

If you're living in Germany in the 1930s, it probably isn't.

But that's no consolation to Egon Loeser, whose carnal misfortunes will push him from the experimental theatres of Berlin to the absinthe bars of Paris to the physics laboratories of Los Angeles, trying all the while to solve two mysteries: whether it was really a deal with Satan that claimed the life of his hero, the great Renaissance stage designer Adriano Lavicini; and why a handsome, clever, charming, modest guy like him can't, just once in a while, get himself laid.

From the author of the acclaimed BOXER, BEETLE comes a historical novel that doesn't know what year it is; a noir novel that turns all the lights on; a romance novel that arrives drunk to dinner; a science fiction novel that can't remember what 'isotope' means; a stunningly inventive, exceptionally funny, dangerously unsteady and (largely) coherent novel about sex, violence, space, time, and how the best way to deal with history is to ignore it.

LET'S HOPE THE PARTY WAS WORTH IT

Less than two years after his multi-award-winning debut BOXER BEETLE Ned Beauman returns with another fizzing firework of a caper, featuring as many cracking escapades as its predecessor . . . His prose is wonderfully discursive and buzzes with originality, while scenes of pure farce nod respectfully to Thomas Pynchon and Hunter S Thompson . . . his bold characterisations, slapstick humour, slick similes and tangential subplots are sublime. A strong, smart follow-up that proves Beauman is more than comfortable with the hype he's created for himself. * Time Out *
I'm sure it's the funniest novel on the list. * Evening Standard *
Terrific . . . if there was ever any worry that he might have crammed all his ideas into his first book, this makes it clear he kept a secret bunker of his best ones aside. * Guardian *
'If you care about contemporary writing, you must read this . . . BOXER, BEETLE was acclaimed as the most inventive fictional debut in years, buzzing with energy and ideas, and Beauman's second novel keeps up the pace' * Tatler *
I hugely enjoyed Ned Beauman's clever-dick conflation of modern east London with Thirties Berlin . . . the antihero Egon Loeser is as deft and witty a portrait of blinkered self-obsession as I have read * Nick Curtis, Evening StandardBooks of the Year *
'THE TELEPORTATION ACCIDENT is a hilarious picaresque that begins in Thirties Berlin (though one so littered with ketamine, haircuts and sad young literary men that it could pass for Dalston in 2012) . . . Beauman manages to be seriously intelligent and seriously funny at the same time' * Tim Martin, Daily Telegraph Books of the Year *
Funny and startlingly inventive . . . Beauman is a writer of prodigious talent, and there are enough ideas and allusions and comic set pieces in this work, longlisted for the 2012 Man Booker Prize, to fill myriad lesser novels. * FT *
[Beauman] is blisteringly funny, witty and erudite . . . Beauman manages to combine the intrigue of a thriller with the imagery of a comedy. It makes for an excellent read. * Daily Telegraph *
This is an unquestionably brilliant novel, ribald and wise in equal measure . . . a witty and sometimes deeply moving fictional exegesis of the Modernist twilight. * TLS *
A glorious, over-the-top production, crackling with inventive wit and seething with pitchy humour . . . A beguiling success . . . Ingenious . . . There is such an easy felicity in Beauman's writing and such a clever, engaging wit . . . that one feels he could write something as much fun every two years. The prospect of which makes me very, very happy indeed. * Scotsman *
An extraordinary, Pynchonesque flea-circus of a book...Ned Beauman's pyrotechnical comic novel, his second, is as violently clever as you'd expect from his earlier book, BOXER, BEETLE... [a] frantically entertaining pasteboard extravaganza * The Sunday Times *
He's done it again . . . Beauman does adolescent male lust and anomie with the verve of a young Amis and this is a great romp of a novel, delightful in its inventiveness. * Prospect *
A hoot - very clever and charming, with an awesone range of reference. * Sunday Telegraph *
Funny, scandalous, decadent and erudite, THE TELEPORTATION ACCIDENT is a hugely enjoyable madness with flavours of Pynchon, Huysmans and Jerome K. Jerome. * Nick Harkaway *
Beauman, whose first novel BOXER, BEETLE was widely acclaimed, sets out his stall as a latter-day Evelyn Waugh in this dazzling satire that begins in 1930s Berlin. Biting black comedy. * The Times *
Ned Beauman is a very funny writer, but also a very serious one. His second novel is a glorious rigmarole of satire, insanity, genre tropes and aching romantic pain, but never doubt that it is an essentially serious book. * Independent *
Its meticulously crafted plot skitters from sci-fi to noir thriller; with comedic interludes and some romance for added sizzle . . . you'll be left bedazzled. * Daily Mail *
Beauman has a huge gift for satire and the wry phrase...brought together so immaculately you never notice how hard he's working. * Word Magazine *
A novel that turns everything on its head, Beauman's book is critical, funny and deliciously deviant. * The List *
Ned Beauman is a writer of unceasing invention and his second novel is replete with ideas. * Metro *
Popping with ideas, fizzing with vitality and great fun to quaff. * Independent on Sunday *
Ned Beauman has written another very pleasing comic romp through the 1930s, offering a second offbeat perspective on the rise of the Third Reich. It is, once more, full of good jokes, erudite winks and historical whimsy . . . Beauman excels at both the grand, jostling structure and the individual sentence. His similes are often inspired, his dialogue is frequently hilarious, and his ability to keep all the plates spinning, as the story dashes between years and continents, is very impressive. * Literary Review *
Lovable, brilliant and entertaining . . . Beauman takes a huge range of styles and genres and pushes them and bends them often to glorious effect . . . Beauman has a huge talent for metaphor and simile and hits with almost all of them. My personal favourite was 'there was enough ice in her voice for a serviceable daiquiri' - very Raymond Chandler. Also brilliant are some of his characters - notably Colonel Gorge who suffers from 'ontological agnosia' brought on by sniffing too much of the car polish that has made him rich, which means that he cannot differentiate between pictures and reality. That this references back to the Brechtian approach to theatre is just one example of the cleverness of Beauman's approach. But mostly, Gorge is just hilarious . . . Beauman is one of the most innovative young writers around and is one to follow. * www.thebookbag.co.uk *
It is brilliantly witty, with a pace edging on breathless. Every stage is like the denouement of a great crime novel refigured as science. The reader is constantly challenged (and rewarded) as occurrences alternate between being clear and nebulous. Genuinely exhilarating. * We Love This Book *
At times THE TELEPORTATION ACCIDENT is as bloody-mindedly difficult as Egon Loeser, but it builds slowly, brings its threads together with great skill, and Ned Beauman turns a good phrase as his characters dance their line between the cleverly obnoxious and the obnoxiously clever. * SFX *
A shape-shifting, time-travelling, genre-teasing treat. * Seven *

Ned Beauman was born in 1985 and lives in London. His debut novel, BOXER, BEETLE, won the Writers' Guild Award for Best Fiction Book and the Goldberg Prize for Outstanding debut Fiction, and was shortlisted for the Guardian First Book Award and the Desmond Elliot Prize. In 2011 Ned Beauman was picked by The Culture Show as one of the 12 Best New British Writers.

GOR004724143
The Teleportation Accident by Ned Beauman
Ned Beauman
Used - Very Good
Paperback
Hodder & Stoughton General Division
2013-04-11
368
034099844X
9780340998441
Winner of Encore Award 2012 (UK) Winner of Somerset Maugham Awards 2013 (UK)
Book picture is for illustrative purposes only, actual binding, cover or edition may vary.
This is a used book - there is no escaping the fact it has been read by someone else and it will show signs of wear and previous use. Overall we expect it to be in very good condition, but if you are not entirely satisfied please get in touch with us.