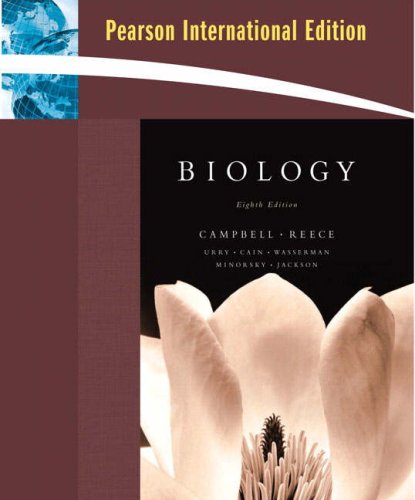 Biology with Mastering Biology
by Neil A. Campbell

Biology with Mastering Biology: International Edition by Neil A. Campbell

The best-selling biology textbook in the world just got better!

Neil Campbell and Jane Reece's BIOLOGY is the unsurpassed leader in introductory biology. The text's hallmark values-accuracy, currency, and passion for teaching and learning-have made Campbell/Reece the most successful book for students and instructors for seven consecutive editions.

For the Eighth Edition, new coauthors have joined with those from previous editions to infuse this proven text with new ideas while upholding its hallmark values. Their collaboration has produced the authoritative introduction to biology, told with a unified voice and vision.

About Neil A. Campbell

Neil Campbell combined the investigative nature of a research scientist with the soul of an experienced and caring teacher. He

earned his M.A. in Zoology from UCLA and his Ph.D. in Plant Biology from the University of California, Riverside, where he received the Distinguished Alumnus Award in 2001. Neil published numerous research articles on desert and coastal plants and how the sensitive plant (Mimosa) and other legumes move their leaves. His 30 years of teaching in diverse environments included general biology courses at Cornell University, Pomona College, and San Bernadino Valley College, where he received the college's first Outstanding Professor Award in 1986. Neil was a visiting scholar in the Department of Botany and Plant Sciences at the University of California, Riverside. In addition to his authorship of this book, he coauthored Biology: Concepts & Connections and Essential Biologywith Jane Reece. Neil died shortly after the initial planning of this revision.

Lead author Jane Reece, Neil Campbell's longtime collaborator, has participated on every edition of BIOLOGY-first as an editor and contributor, then as an author. Her education includes an A.B. in Biology from Harvard University, an M.S. in Microbiology from Rutgers University, and a Ph.D. in Bacteriology from UC Berkeley. Before migrating to California from the Northeast, she taught biology at Middlesex County College and Queensborough Community College. At UC Berkeley, and later as a postdoctoral fellow in genetics at Stanford University, her research focused on genetic recombination in bacteria. Besides her work on BIOLOGY,she has been a coauthor on Biology: Concepts & Connections, Essential Biology, andThe World of the Cell.

For the Eighth Edition, Jane is joined by five coauthors whose contributions reflect their biological expertise as scientific

researchers and their teaching sensibilities gained from years of experience as instructors.

Lisa Urry (Units 1-3, Chapters 2-21, and Chapter 47) is a professor at Mills College and was a major contributor

to the Seventh Edition. After graduating from Tufts University with a double major in Biology and French, Lisa completed her Ph.D. in Molecular and Developmental Biology at MIT. Following postdoctoral appointments at Harvard Medical School, Tufts

University, and UC Berkeley, she began teaching at Mills College in Oakland, California, where she currently holds the Letts-Villard

Professorship and serves as Chair of the Biology Department. She has published research articles on various topics involving

committed to promoting opportunities for women in science education and research.

Michael Cain (Units 4 and 5, Chapters 22-34) is an ecologist and evolutionary biologist currently at Bowdoin College. Michael earned a joint major in Biology and Math from Bowdoin College, an M. Sc. from Brown University, and a Ph.D. in Ecology and

Evolutionary Biology from Cornell University. After postdoctoral work in plant ecology at the University of Connecticut and molecular genetics at Washington University in St. Louis, Michael went on to teach general biology, ecology, and evolution in a diverse range of settings, including Carleton College, New Mexico State University, and the Rose-Hulman Institute of Technology in Indiana. Michael is the author of dozens of scientific papers on topics that include foraging behavior in insects and plants, long-distance seed dispersal, and speciation in crickets.

Peter Minorsky (Unit 6, Chapters 35-39) revised Unit 6 for the Sixth and Seventh Editions and is a professor at Mercy College in New York, where he teaches evolution, ecology, botany, and introductory biology. He is also the science writer for the journal Plant Physiology. He received his B.A. in Biology from Vassar College and his Ph.D. in Plant Physiology from Cornell University. After a postdoctoral fellowship at the University of Wisconsin at Madison, Peter taught at Kenyon College, Union College, Western Connecticut State University, and Vassar College. He is an electrophysiologist who studies plant responses to stress and is currently exploring the possible effects of geomagnetism on plant growth.

Steve Wasserman (Unit 7, Chapters 40-46 and 48-51) is a professor at the University of California, San Diego. He earned his A.B. in Biology from Harvard University and his Ph.D. in Biological Sciences from MIT. Since a postdoctoral sojourn at UC Berkeley, where he investigated topological transformations of DNA, he has focused on regulatory pathway mechanisms. Working with the fruit fly Drosophila, he has contributed to the fields of embryogenesis, reproduction, and immunity. As a faculty member at the University of Texas, Southwestern Medical Center and UC San Diego, he has taught genetics, development, and physiology to undergraduate, graduate, and medical students. He has also served as the research mentor for more than a dozen doctoral students and nearly 40 aspiring scientists at the undergraduate and high school level. Steve has been the recipient of distinguished scholar awards from both the Markey Charitable Trust and the David and Lucille Packard Foundation. He recently received the 2007 Academic Senate Distinguished Teaching Award for undergraduate teaching at UC San Diego.

Rob Jackson (Unit 8, Chapters 52-56) is a professor of biology and Nicholas Chair of Environmental Sciences at Duke University. He directed Duke's Program in Ecology for many years and is currently the Vice President of Science for the Ecological Society of

America. Rob holds a B.S. in Chemical Engineering from Rice University, as well as M.S. degrees in Ecology and Statistics and a Ph.D. in Ecology from Utah State University. He was a postdoctoral scientist in Stanford University's Biology Department and an Assistant Professor at the University of Texas at Austin. Rob has received numerous awards, including a Presidential Early Career Award in Science and Engineering from the National Science Foundation. He has published a trade book about the environment, The Earth Remains Forever, and a children's book of poetry called Animal Mischief. His second children's book, Not Again, will be published in 2008.

1. INTRODUCTION: Themes in the Study of Life

Unit One: The Chemistry of Life

2. The Chemical Context of Life

3. Water and the Fitness of the Environment

4. Carbon and the Molecular Diversity of Life

5. The Structure and Function of Large Biological Molecules

8. An Introduction to Metabolism

14. Mendel and the Gene Idea

15. The Chromosomal Basis of Inheritance

16. The Molecular Basis of Inheritance

17. From Gene to Protein

21. Genomes and Their Evolution

22. Descent with Modification: A Darwinian View of Life

23. The Evolution of Populations

24. The Origin of Species

25. The History of Life on Earth

26. Phylogeny and the Tree of Life

32. An Introduction to Animal Diversity

45. Hormones and the Endocrine System

52. An Introduction to Ecology and the Biosphere

GOR010212022
Biology with Mastering Biology: International Edition by Neil A. Campbell
Neil A. Campbell
Used - Very Good
Hardback
Pearson Education (US)
2007-12-07
1464
0321544242
9780321544247
N/A
Book picture is for illustrative purposes only, actual binding, cover or edition may vary.
This is a used book - there is no escaping the fact it has been read by someone else and it will show signs of wear and previous use. Overall we expect it to be in very good condition, but if you are not entirely satisfied please get in touch with us.