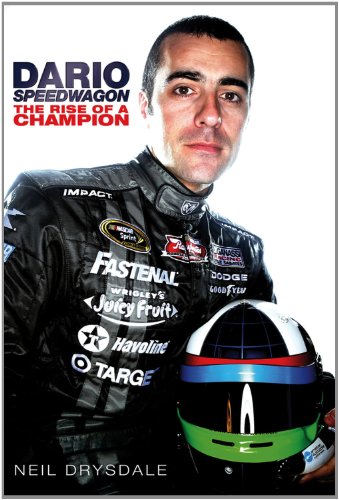 Dario Franchitti is one of Scotland's most charismatic sporting personalities. This book presents the story of how he conquered his sport, both in his words and through the eyes of Jackie Stewart, Allan McNish, David Leslie and a range of other well-known figures in the history of Scottish motoring.

Dario Speedwagon: The Rise of a Champion by Neil Drysdale

Dario Franchitti is one of Scotland's most charismatic sporting personalities. From an early age, when he grew up in the coal-mining community of West Lothian, he was fascinated with motoring and machinery and going as fast as he possibly could. He has known triumph, such as in 2007, when he won the fabled Indy 500 and the IRL championship, and he is married to the acclaimed Hollywood actress, Ashley Judd. But he has also experienced tragedy in his life on a regular basis, losing one of his best friends, Greg Moore, during an emotional weekend in 1999, as well as suffering the loss of several of his racing compatriots in air accidents, including his early mentor, David Leslie, the former world rally champion, Colin McRae.Throughout it all, ever since he graduated to the senior ranks of the sport under the tutelage of the great Jackie Stewart, Franchitti has borne his frustrations, his involvement in several terrifying accidents and a sickening litany of injuries, with dignity, courage and good humor, allied to the philosophy that he was born to race at the maximum and that danger is an occupational hazard.
Dario Franchitti's story is an inspirational tale of a small-town boy who followed the road to Tinseltown. Here, for the first time, is the story of how he conquered his sport, both in his words and through the eyes of Jackie Stewart, Allan McNish, David Leslie and a range of other well-known figures in the history of Scottish motoring.
Neil Drysdale has been involved in journalism since the mid-1980s and has been praised for the quality of his writing across a wide range of sports. He was an award-winning writer with the Scotland on Sunday for 15 years, but now works freelance, mostly for the Herald and the Sunday Times. He is the author of two sports autobiographies -most recently the best-selling SilverSmith: the Biography of Walter Smith - and of Dad's Army, an account of Freuchie's famous march to Lord's in pursuit of the National Village Cricket Cup in 1985. He is married and lives in Falkirk.
GOR003755168
9781841587639
184158763X
Dario Speedwagon: The Rise of a Champion by Neil Drysdale
Neil Drysdale
Used - Very Good
Hardback
Birlinn General
2008-10-18
256
N/A
Book picture is for illustrative purposes only, actual binding, cover or edition may vary.
This is a used book - there is no escaping the fact it has been read by someone else and it will show signs of wear and previous use. Overall we expect it to be in very good condition, but if you are not entirely satisfied please get in touch with us
Trustpilot