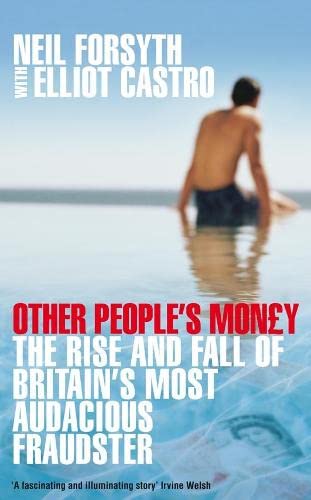 Other People's Money
by Neil Forsyth

In Stock
£5.49
The gripping true story of Elliot Castro, a young man who lived the high life funded by credit card fraud.
Very Good
5 in stock

Other People's Money: The Rise and Fall of Britain's Most Audacious Fraudster by Neil Forsyth

Elliot Castro is unique in the history of British financial crime. No outside individual has stolen so much money for so long from the credit card system. Identifying the banks' many security weaknesses, utilising his formidable intelligence and charm, Elliot embarked on a spending spree that ran into seven figures. The money wasn't funding an addiction or other criminal enterprises - Elliot was simply a working-class kid with no qualifications who wanted to see the world in style.

From London to New York, Ibiza to Beverly Hills, Castro lived a fantasy life. He stayed in famous hotels, travelled first class, and blew a small fortune on designer clothes and champagne. Time after time Elliot managed to wriggle free of the numerous authorities who were on his tail while his life spiralled out of control. As he juggled aliases and lied to family and friends he began to lose to grip on reality. Meanwhile, from an office at Heathrow Police Station, a detective was patiently tracking him down.

Now, for the first time, Elliot and others tell his amazing story to Neil Forsyth. Filled with humour, as fast paced as any thriller, Other People's Money also offers fascinating insights into the techniques of Britain's most audacious, and friendliest, credit card fraudster.

Neil Forsyth is a freelance journalist who has written for (amongst others) the Scotsman, Scotland on Sunday, Maxim, FHM and Details. Elliot Castro lives in Glasgow and works as a DJ in a number of large nightclubs. He also works with ID and fraud specialist companies - including speaking at industry conferences and advising companies on how to close the loopholes he once exploited so successfully.

GOR001202267
Other People's Money: The Rise and Fall of Britain's Most Audacious Fraudster by Neil Forsyth
Neil Forsyth
Used - Very Good
Hardback
Pan Macmillan
2007-04-06
320
028307051X
9780283070518
N/A
Book picture is for illustrative purposes only, actual binding, cover or edition may vary.
This is a used book - there is no escaping the fact it has been read by someone else and it will show signs of wear and previous use. Overall we expect it to be in very good condition, but if you are not entirely satisfied please get in touch with us.