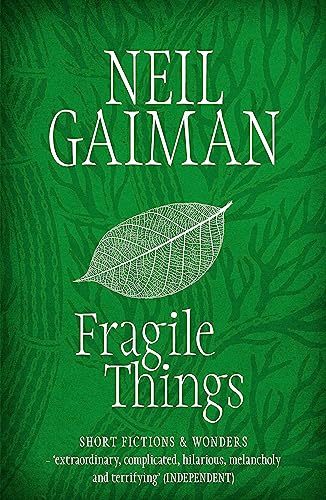 Neil Gaiman's extraordinary Fragile Things, from the bestselling author of The Ocean at the End of the Lane and American Gods, reveals one of the world's most gifted storytellers at the height of his powers, and harnesses the Gothic power of Angela Carter's The Bloody Chamber to the storytelling genius of Stephen King. 'The collections also boasts lush prose . . . and a winning faith in the enchantment of stories' Kirkus Reviews

The distinctive genius of Neil Gaiman has been championed by writers as diverse as Norman Mailer and Stephen King. With THE SANDMAN Neil Gaiman created one of the most sophisticated, intelligent and influential graphic novel series of our time. Now Gaiman has produced FRAGILE THINGS, his second collection of short fiction. These stories will dazzle your senses, haunt your imagination and move you to the very depths of your soul.

'Predominantly dark, the stories are occasionally whimsical and satirical, and at times humorous, but the book's underlying theme is fragility and how people, dreams and hearts are so easily broken' * Sun Herald *
'The collection also boasts lush prose...and a winning faith in the enchantment of stories. Expect the unexpected. Then savor the luscious chills.' * Kirkus Reviews *
'Gaiman has a deft touch for suprise and inventiveness, and there are inspired moments' * Publishers Weekly *
'Immensely entertaining ... Combines the anarchy of Douglas Adams with a Wodehousian generosity of spirit' * Susanna Clarke *

GOR001243370
Fragile Things by Neil Gaiman
Neil Gaiman
Used - Very Good
Paperback
Headline Publishing Group
2007-04-05
448
0755334140
9780755334148
N/A
Book picture is for illustrative purposes only, actual binding, cover or edition may vary.
This is a used book - there is no escaping the fact it has been read by someone else and it will show signs of wear and previous use. Overall we expect it to be in very good condition, but if you are not entirely satisfied please get in touch with us.