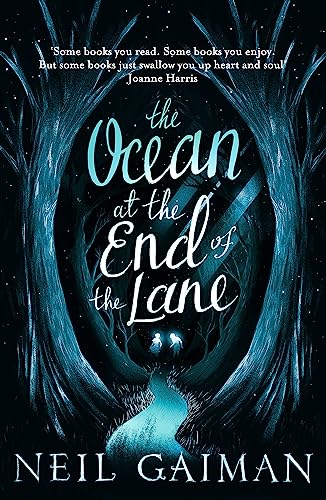 The Ocean at the End of the Lane
by Neil Gaiman

Used Price
£6.49
New RRP £8.99
Free Shipping in the UK
From New York Times and Sunday Times bestselling writer Neil Gaiman, comes a novel of memory, magic and survival, about the power of stories and the darkness inside each of us.
Reviews:
Trustpilot
Like New Very Good Good

The Ocean at the End of the Lane Summary

A special Christmas edition of the Sunday Times bestseller.

Customer Reviews - The Ocean at the End of the Lane

The Ocean at the End of the Lane Reviews

Gaiman's achievement is to make the fantasy world seem true * The Times *
A book that reads like a half-remembered fairy tale from childhood... and slots perfectly into the canon of British magical fiction * New Statesman *
The writer who comes closest to the being the Dahl of his generation... The Ocean at the End of the Lane has, like all good myths, a power that defies explanation * Sunday Express *
Within a few pages you know you're reading a future classic * Stylist *
told with a rare understanding of all that makes us human, and shows the power of stories to reveal and shelter us from the darkness inside and out. * Mid-West Times *

GOR007288918
The Ocean at the End of the Lane by Neil Gaiman
Neil Gaiman
Used - Like New
Paperback
Headline Publishing Group
2015-11-01
272
1472228421
9781472228420
N/A
Book picture is for illustrative purposes only, actual binding, cover or edition may vary.
The book has been read, but looks new. The book cover has no visible wear, and the dust jacket is included if applicable. No missing or damaged pages, no tears, possible very minimal creasing, no underlining or highlighting of text, and no writing in the margins.