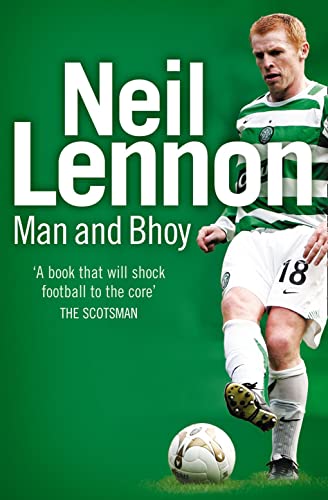 Captain of Celtic and midfield enforcer for Northern Ireland, Neil Lennon is one of the most controversial figures in British football. His story, fully updated for the Celtic 2006/7 season in this paperback edition, is an extraordinary tale of religious bigotry, life-threatening career injury and tumultuous football success at club level.

Captain of Celtic and midfield enforcer for Northern Ireland, Neil Lennon is one of the most controversial figures in British football. His story, fully updated for the Celtic 2006/7 season in this paperback edition, is an extraordinary tale of religious bigotry, life-threatening career injury and tumultuous football success at club level.

The first Northern Irish Roman Catholic to play for Celtic and to be chosen to captain his country, Lennon was sensationally forced to quit the captaincy even before he took the field following death threats by Loyalist paramilitaries.

In Northern Ireland, the words `Neil Lennon RIP' were painted on a wall near his family home, while in Scotland, he has been the target of vicious verbal and physical assault by fans of Old Firm rivals Rangers - including being mugged on the street and hung in effigy. Now he will give his side of these stories, revealing in full the terrible consequences of the religious hatred that has tainted his career.

Lennon will write of his Leicester years under Martin O'Neill, and how the Midlands club defied bigger rivals by maintaining their Premiership League status and winning two League Cups. He will also tell the inside story of Celtic under O'Neill; how his GBP5 million transfer to Parkhead nearly didn't happen; his wrongful arrest on a club night out; lifting the domestic treble in a glorious first season with Celtic, and the continued revival of the club to the point where they reached the UEFA Cup Final (narrowly losing out to a Jose Mourinho-inspired Porto); and his relationship with current boss Gordon Strachan.

As he approaches the twilight of his playing career, Lennon has decided the time is right to reveal all about his life on the field - including his horrific spinal injury and his less than happy apprenticeships at Motherwell and Manchester City - as well as his hitherto closely guarded private life, including his battle with depression.

It's a book that will shock football to its core.

Neil Lennon was born in June 1971 in Lurgan, County Armagh. He signed professional forms in 1989 and played for Manchester City, Motherwell, Crewe and Leicester before joining Celtic in 2000. He has since made over 250 appearances for the club, and has 40 international caps for Northern Ireland.

Martin Hannan is a sports journalist for Scotland on Sunday. An award-winning writer, his book Rock of Gibraltar, published by Mainstream, was widely acclaimed as one of the best racing books of 2004.

GOR001188600
Neil Lennon: Man and Bhoy by Neil Lennon
Neil Lennon
Used - Very Good
Paperback
HarperCollins Publishers
2007-07-24
400
0007233485
9780007233489
N/A
Book picture is for illustrative purposes only, actual binding, cover or edition may vary.
This is a used book - there is no escaping the fact it has been read by someone else and it will show signs of wear and previous use. Overall we expect it to be in very good condition, but if you are not entirely satisfied please get in touch with us.