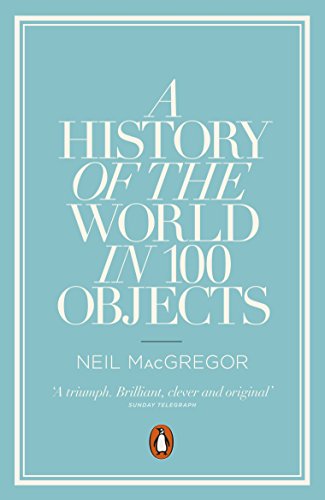 A History of the World in 100 Objects
by Neil MacGregor

In Stock
£5.49
Deals with human history, exploring past civilizations through the objects that defined them. This title shows the surviving objects made by human hands, a chopping tool from the Olduvai gorge in Africa, and also features objects which characterise the world we live in today.
Very Good Good
21 in stock

A History of the World in 100 Objects Summary

A History of the World in 100 Objects by Neil MacGregor

Neil MacGregor's A History of the World in 100 Objects takes a bold, original approach to human history, exploring past civilizations through the objects that defined them.

Encompassing a grand sweep of human history, A History of the World in 100 Objects begins with one of the earliest surviving objects made by human hands, a chopping tool from the Olduvai gorge in Africa, and ends with objects which characterise the world we live in today.

Seen through MacGregor's eyes, history is a kaleidoscope - shifting, interconnected, constantly surprising, and shaping our world today in ways that most of us have never imagined. A stone pillar tells us about a great Indian emperor preaching tolerance to his people; Spanish pieces of eight tell us about the beginning of a global currency; and an early Victorian tea-set speaks to us about the impact of empire.

An intellectual and visual feast, this is one of the most engrossing and unusual history books published in years.

'A triumph: hugely popular, and rightly lauded as one of the most effective and intellectually ambitious initiatives in the making of 'public history' for many decades' Sunday Telegraph

'This is a story book, vivid and witty, shining with insights, connections, shocks and delights' Gillian Reynolds Daily Telegraph

Neil MacGregor was Director of the National Gallery, London from 1987 to 2002 and of the British Museum from 2002 to 2015, and Chair of the Steering Committee of the Humboldt Forum in Berlin from 2015 to 2018. His previous books include A History of the World in 100 Objects, Shakespeare's Restless World and Germany: Memories of a Nation, all available in Penguin and now between them translated into more than a dozen languages. In 2010, he was made a member of the Order of Merit, the UK's highest civil honour. In 2015 he was awarded the Goethe Medal and the German National Prize. In 2018 the radio series Living with the Gods received the Sandford Saint Martin Award for Religious Broadcasting.

GOR003968140
A History of the World in 100 Objects by Neil MacGregor
Neil MacGregor
Used - Very Good
Paperback
Penguin Books Ltd
2012-06-28
640
0241951771
9780241951774
N/A
Book picture is for illustrative purposes only, actual binding, cover or edition may vary.
This is a used book - there is no escaping the fact it has been read by someone else and it will show signs of wear and previous use. Overall we expect it to be in very good condition, but if you are not entirely satisfied please get in touch with us.