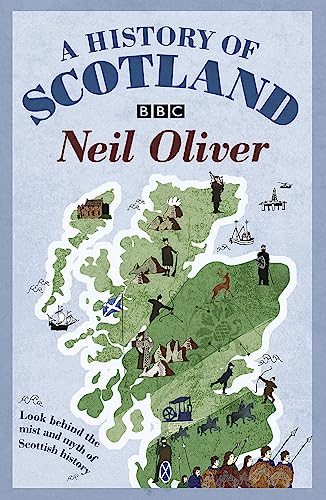 A History Of Scotland
by Neil Oliver

In Stock
5,49 £
'The beauty of Scotland is overwhelming and I've often thought that Scotland's popular history is just like her landscape - impossibly romantic, obscured by mist and myth and always changing.' The dramatic story of Scotland - by charismatic television historian, Neil Oliver.
Like New Very Good Good Well Read
Only 2 left

A History Of Scotland Summary

A History Of Scotland by Neil Oliver

Scotland is one of the oldest countries in the world with a vivid and diverse past. Yet the stories and figures that dominate Scottish history - tales of failure, submission, thwarted ambition and tragedy - often badly serve this great nation, overshadowing the rich tapestry of her intricate past.

Historian Neil Oliver presents a compelling new portrait of Scottish history, peppered with action, high drama and centuries of turbulence that have helped to shape modern Scotland. Along the way, he takes in iconic landmarks and historic architecture; debunks myths surrounding Scotland's famous sons; recalls forgotten battles; charts the growth of patriotism; and explores recent political developments, capturing Scotland's sense of identity and celebrating her place in the wider world.

A History Of Scotland Reviews

Oliver has a great passion for his subject...an entertaining, well balanced and informative read. * SOUTH WALES ARGUS *
A vivid and compellnig picture of a country we may thnk we know, but one that can still surprise. * GOOD BOOK GUIDE *

Neil Oliver is a Scottish archaeologist, historian, broadcaster and writer who has become widely known as the presenter of BBC's flagship series A History of Scotland. Before that, his distinctive style was much in evidence as the charismatic presenter of the award-winning multi-part documentary series Coast and the author of its tie-in book. His archaeological training at Glasgow University was put to good use in BBC2's series Two Men in a Trench where he visited historic British battlefields and attempted to recreate the events of each battle. He co-wrote the two accompanying books. He has also presented the BBC series A History of Ancient Britain, Vikings, The Last Explorers and Sacred Wonders of Britain, as well as Coast Australia. He lives in Stirling with his wife and three children. Find out more at www.neiloliver.com or follow him on Twitter @NEIL_OLIVER_

GOR008320775
A History Of Scotland by Neil Oliver
Neil Oliver
Used - Like New
Paperback
Orion Publishing Co
2010-11-11
480
0753826631
9780753826638
N/A
Book picture is for illustrative purposes only, actual binding, cover or edition may vary.
This is a used book - there is no escaping the fact it has been read by someone else and it will show signs of wear and previous use. Overall we expect it to be in very good condition, but if you are not entirely satisfied please get in touch with us.