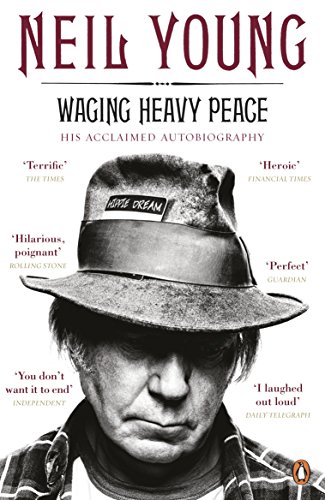 In Stock
£2.99
Presents a kaleidoscopic view of personal life and musical creativity. This title offers a journey that spans the snows of Ontario to the LSD-laden boulevards of 1966 Los Angeles to the contemplative paradise of Hawaii today.
Very Good Good
7 in stock

Neil Young is a singular figure in the history of rock and pop culture in the last four decades, inducted not once but twice into the Rock and Roll Hall of Fame.

Reflective, insightful and disarmingly honest, Waging Heavy Peace is his long-awaited memoir. From his youth in Canada to his crazy journey out to California, through Buffalo Springfield and Crosby, Stills & Nash, to his massively successful solo career and his re-emergence as the patron saint of grunge on to his role today as one of the last uncompromised and uncompromising survivors of rock 'n' roll - this is Neil's story told in his own words.

Young presents a kaleidoscopic view of personal life and musical creativity; it's a journey that spans the snows of Ontario to the LSD-laden boulevards of 1966 Los Angeles to the contemplative paradise of Hawaii today. Along the way he writes about the music, the victims, the girls and the drugs; about his happy family life but also about the health problems he and his children have experienced; about guitars, cars and sound systems; about Canada and California and Hawaii. Candid, witty and revealing, this book takes its place beside the classic memoirs of Bob Dylan and Keith Richards.

'He's talking to you, not at you, unravelling himself as well, and you don't want it to end . . . You see rock and roll history from the inside out, and in the present tense' Independent

'Young appears bounteous and joyful, a genuinely happy hippy . . . Unusually for a rock memoir, this one is almost completely angst-free' Sunday Times

'A real treat . . . he writes openly and movingly abut the key figures in his life...you feel you know Young better for reading it' Metro

Neil Young was born in Toronto in 1945, and later went to live with his mother in Winnipeg after his parents split up. He moved to California in 1966 where he co-founded Buffalo Springfield before joining the hugely successful Crosby, Stills & Nash, and then embarking on a stellar solo career. He has been inducted not once but twice into The Rock and Roll Hall of Fame, which describes him as 'one of rock 'n' roll's greatest songwriters and performers'.

Young is an outspoken advocate of environmental issues and the welfare of small farmers - he co-founded Farm Aid in 1986. He is also active in educatonal projects for disabled children, and co-founded The Bridge School which assists children with physical impairments and communication needs.

GOR005013651
Waging Heavy Peace: A Hippie Dream by Neil Young
Neil Young
Used - Very Good
Paperback
Penguin Books Ltd
2013-06-06
512
0241962161
9780241962169
N/A
Book picture is for illustrative purposes only, actual binding, cover or edition may vary.
This is a used book - there is no escaping the fact it has been read by someone else and it will show signs of wear and previous use. Overall we expect it to be in very good condition, but if you are not entirely satisfied please get in touch with us.