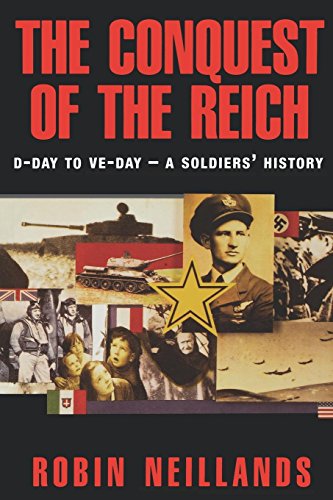 This is the story of the last five months of Hitler's Thousand Year Reich, from New Year's Day to VE Day, May 8, 1945. It is a story told not in the words of historians or scholars, but in the words of the people who lived through it, who fought and endured: soldier and civilian, American infantryman and British paratrooper, Canadian gunner and Australian pilot, New Zealand POW and German civilian. With his unrivalled gift for popular history Robin Neillands, in his follow-up to the enormously successful D-Day 1944, recreates in engaging narrative fashion the most dramatic and bloody months of the war. Drawing on hundreds of interviews, letters, and inside eyewitness testimony from veterans about such subjects as the esprit de corps in the Allied and Axis armies, the discovery of the concentration camps, dissension in the Allied command, and the meeting of Russians and Americans at the Elbe, the book recounts the effects of many of the most crucial events of the conflict on soldier and civilian alike. The Battle of the Bulge, the liberation of Auschwitz, the Malmedy Massacres, the fall of Warsaw to the Red Army, the destruction of Dresden, the lynching of Allied aircrews, Yalta, Hitler's "Scorched Earth" directive, the massive parachute drops by the Allied forces, the death of Roosevelt, the last days of Hitler, and, finally, the surrender of Germany - it's all here, rendered in engrossing and rich detail in this example of military history at its finest.

"A skillful blend of narrative overview and first person accounts . . . [written] in the best tradition of oral history and war reportage."

Author of numerous books, including D-Day: 1944 and Conquest of the Reich (also available from NYU Press), Robin Neillands served in 45 Commando, Royal Marines, and has extensive contacts with special force units the world over. He lives in England.

GOR004696504
Conquest Reich CB by Neillands
Neillands
Used - Very Good
Hardback
New York University Press
1995-02-01
1
0814757812
9780814757819
N/A
Book picture is for illustrative purposes only, actual binding, cover or edition may vary.
This is a used book - there is no escaping the fact it has been read by someone else and it will show signs of wear and previous use. Overall we expect it to be in very good condition, but if you are not entirely satisfied please get in touch with us.