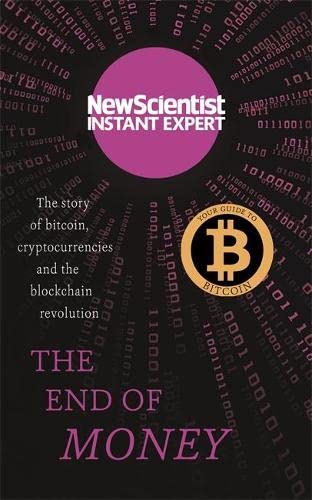 The End of Money
by New Scientist

In Stock
£5,99
The End of Money is an essential introduction to cryptocurrencies and the blockchain revolution which has been hailed as the greatest advancement since the invention of the internet.
Very Good
7 in stock

The End of Money Summary

The End of Money: The story of bitcoin, cryptocurrencies and the blockchain revolution by New Scientist

Murder for hire. Drug trafficking. Embezzlement. Money laundering... These might sound like plot lines of a thriller, but they are true stories from the short history of cryptocurrencies - digital currencies conceived by computer hackers and cryptographers that represent a completely new sort of financial transaction that could soon become mainstream.

The most famous - or infamous - cryptocurrency is bitcoin. But look beyond its tarnished reputation and something much shinier emerges. The technology that underlies bitcoin and other cryptocurrencies - the blockchain - is hailed as the greatest advancement since the invention of the internet. It is now moving away from being the backbone for a digital currency and making inroads into other core concepts of society: identity, ownership and even the rule of law.

The End of Money is your essential introduction to this transformative new technology that has governments, entrepreneurs and forward-thinking people from all walks of life sitting up and taking notice.

ABOUT THE SERIES
New Scientist Instant Expert books are definitive and accessible entry points to the most important subjects in science; subjects that challenge, attract debate, invite controversy and engage the most enquiring minds. Designed for curious readers who want to know how things work and why, the Instant Expert series explores the topics that really matter and their impact on individuals, society, and the planet, translating the scientific complexities around us into language that's open to everyone, and putting new ideas and discoveries into perspective and context.

Since the first magazine was published in 1956, New Scientist has established a world-beating reputation for exploring and uncovering the latest developments and discoveries in science and technology, placing them in context and exploring what they mean for the future. Each week through a variety of different channels, including print, online, social media and more, New Scientist reaches over four million highly engaged readers - over a million readers for the print magazine alone.

GOR008485404
The End of Money: The story of bitcoin, cryptocurrencies and the blockchain revolution by New Scientist
New Scientist
Used - Very Good
Paperback
John Murray Press
2017-04-01
240
1473629535
9781473629530
N/A
Book picture is for illustrative purposes only, actual binding, cover or edition may vary.
This is a used book - there is no escaping the fact it has been read by someone else and it will show signs of wear and previous use. Overall we expect it to be in very good condition, but if you are not entirely satisfied please get in touch with us.