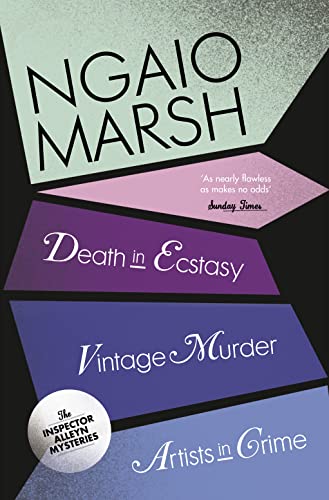 Commemorating 75 years since the Empress of Crime's first book, the second volume in a set of omnibus editions presenting the complete run of 32 Inspector Alleyn mysteries.

Commemorating 75 years since the Empress of Crime's first book, the second volume in a set of omnibus editions presenting the complete run of 32 Inspector Alleyn mysteries.

DEATH IN ECSTASY
Who slipped cyanide into the ceremonial wine of ecstasy at the House of the Sacred Flame? The other initiates and the High Priest claim to be above earthly passions. But Roderick Alleyn discovers that the victim had provoked lust and jealousy, and he suspects that more evil still lurks behind the Sign of the Sacred Flame...

VINTAGE MURDER
New Zealand theatrical manager Alfred Meyer is planning a surprise for his wife's birthday - a jeroboam of champagne descending gently onto the stage after the performance. But, as Roderick Alleyn witnesses, something goes horribly wrong. Is the death the product of Maori superstitions - or something more down to earth?

ARTISTS IN CRIME
It starts as an art exercise - the knife under the drape, the pose outlined in chalk. But when Agatha Troy returns to her class, the scene has been re-enacted: the model is dead, fixed in the most dramatic pose Troy has ever seen. It's a difficult case for Chief Detective Inspector Alleyn. Is the woman he loves really a murderess...?

"It's time to start comparing Christie to Marsh instead of the other way around." --"New York "magazine
Dame Ngaio Marsh was born in New Zealand in 1895 and died in February 1982. She wrote over 30 detective novels and many of her stories have theatrical settings, for Ngaio Marsh's real passion was the theatre. She was both an actress and producer and almost single-handedly revived the New Zealand public's interest in the theatre. It was for this work that the received what she called her `damery' in 1966.
GOR002021895
9780007328703
0007328702
Vintage Murder / Death in Ecstasy / Artists in Crime (The Ngaio Marsh Collection, Book 2) by Ngaio Marsh
Ngaio Marsh
The Ngaio Marsh Collection
Used - Very Good
Paperback
HarperCollins Publishers
2009-09-03
752
N/A
Book picture is for illustrative purposes only, actual binding, cover or edition may vary.
This is a used book - there is no escaping the fact it has been read by someone else and it will show signs of wear and previous use. Overall we expect it to be in very good condition, but if you are not entirely satisfied please get in touch with us
Trustpilot