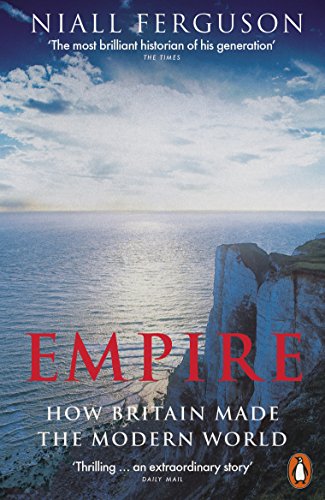 Empire: How Britain Made the Modern World by Niall Ferguson

Once vast swathes of the globe were coloured imperial red and Britannia ruled not just the waves, but the prairies of America, the plains of Asia, the jungles of Africa and the deserts of Arabia. Just how did a small, rainy island in the North Atlantic achieve all this? And why did the empire on which the sun literally never set finally decline and fall? Niall Ferguson's acclaimed Empire brilliantly unfolds the imperial story in all its splendours and its miseries, showing how a gang of buccaneers and gold-diggers planted the seed of the biggest empire in all history - and set the world on the road to modernity.

'The most brilliant British historian of his generation ... Ferguson examines the roles of "pirates, planters, missionaries, mandarins, bankers and bankrupts" in the creation of history's largest empire ... he writes with splendid panache ... and a seemingly effortless, debonair wit' Andrew Roberts

Niall Ferguson is one of Britain's most renowned historians. He is the Milbank Family Senior Fellow at the Hoover Institution, Stanford University, a senior faculty fellow of the Belfer Center for Science and International Affairs at Harvard, and a visiting professor at Tsinghua University, Beijing. He is the author of fifteen books, including The Pity of War, The House of Rothschild, Empire, Civilization and Kissinger, 1923-1968: The Idealist, which won the Council on Foreign Relations Arthur Ross Prize. He is an award-making filmmaker, too, having won an international Emmy for his PBS series The Ascent of Money. His many other prizes include the Benjamin Franklin Prize for Public Service (2010), the Hayek Prize for Lifetime Achievement (2012) and the Ludwig Erhard Prize for Economic Journalism (2013). He was named Columnist of the Year at the 2018 British Press Awards.
GOR009152030
9780141987910
014198791X
Empire: How Britain Made the Modern World by Niall Ferguson
Niall Ferguson
Used - Very Good
Paperback
Penguin Books Ltd
2018-06-07
448
N/A
Book picture is for illustrative purposes only, actual binding, cover or edition may vary.
This is a used book - there is no escaping the fact it has been read by someone else and it will show signs of wear and previous use. Overall we expect it to be in very good condition, but if you are not entirely satisfied please get in touch with us
Trustpilot