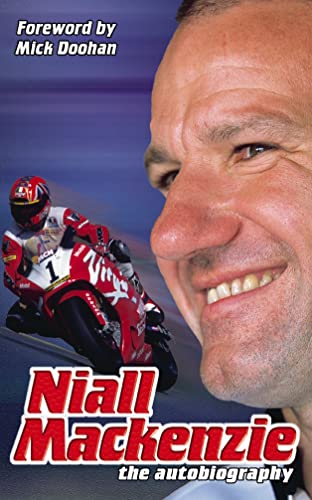 The 40-year-old Scot has been Britain's most successful Grand Prix racer since the legendary Barry Sheene. At his final race in Knockhill in August 2001, more than 20,000 fans turned up to watch Mackenzie and to bid farewell to their local hero.

The 40-year-old Scot has been Britain's most successful Grand Prix racer since the legendary Barry Sheene. At his final race in Knockhill in August 2001, more than 20,000 fans turned up to watch Mackenzie and to bid farewell to their local hero.

Niall has come a long way from Denny where he would regularly get into trouble for racing round the streets, as well as in and out of the local chip shops, to impress the girls.

As an amateur it was recognized he had an abundance of talent, especially after winning his first race at Knockhill, but he also had a wild side and looks back on a time when chasing girls and getting drunk were as important as winning races.

After moving up through the amateur ranks and securing his first factory 500cc rides on a Suzuki, Niall notched up a host of 500cc GP podium finishes before moving to Superbikes. He proved unbeatable between 1996 and 1998 when he claimed a hat-trick of British Superbike titles. On each occasion he beat big-name team-mates such as Jamie Whitham, Chris Walker and Steve Hislop.

This fascinating look into the British GP and Superbike scene through the eyes of one of its legends, has now been fully updated with Mackenzie's latest adventures in his career off the track in 2003.

Niall is an intelligent man with a wry view on life ... it's good honest read Motor Cycle News

Packed with anecdotes about track and pit-lane life ... a great insight into top-level action Daily Record

Niall Mackenzie is a three-time British Superbike champion who retired from competitive racing in 2001. He commentates for Eurosport on British and World Superbikes and test race bikes.

Stuart Barker is a freelance journalist and also works for MCN on a regular basis.

GOR001201879
Niall Mackenzie: The Autobiography by Niall MacKenzie
Niall MacKenzie
Used - Very Good
Paperback
HarperCollins Publishers
2003-07-07
464
0007145098
9780007145096
N/A
Book picture is for illustrative purposes only, actual binding, cover or edition may vary.
This is a used book - there is no escaping the fact it has been read by someone else and it will show signs of wear and previous use. Overall we expect it to be in very good condition, but if you are not entirely satisfied please get in touch with us.