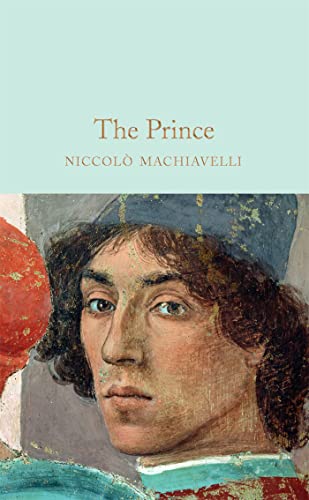 The Prince
by Niccolo Machiavelli

In Stock
£9.99
Machiavelli's profound political essay from the sixteenth century, with an afterword by Oliver Francis.
New£9.99
5 in stock

The Prince by Niccolo Machiavelli

Niccolo Machiavelli provides a remarkably uncompromising picture of the true nature of power, no matter what era or by whom it is exercised.

Part of the Macmillan Collector's Library, a series of stunning, clothbound, pocket-sized classics with gold-foiled edges and ribbon markers. These beautiful books make perfect gifts or a treat for any book lover. This edition features an afterword by Oliver Francis.

Drawing on examples from the ancient Greeks and Romans and from Machiavelli's contemporaries, The Prince offers - some believed with satirical intent - advice on how a ruler should preserve his power, conduct and warfare, and maintain his reputation. Machiavelli not only influenced many of the great statesmen of his age, but was also one of the founding fathers of modern political thought. The Prince, written in 1513 and published in 1532, is one of the most famous pieces of writing of all time.

Few books have attracted such an influential readership as The Prince -- Michael Arditti * Telegraph *
Machiavelli was showing how to achieve power and hold on to it -- Lesley McDowell
At a time when pious drivel, feckless rhetoric and fatal arrogance too often rule the affairs of us all, a realist dollop of Machiavellianism might well be added to the cauldron of post-modern statecraft -- Ronald K. L. Collins * Washington Independent Review of Books *

Niccolo Machiavelli was born on 3 May 1469 in Florence, during that city-state's peak of greatness under the Medici family. In 1494, the year the Medici were exiled, Machiavelli entered Florentine public service. In 1498 he was appointed Chancellor and Secretary to the Second Chancery. Serving as diplomat for the republic, Machiavelli was an emissary to some of the most distinguished people of their age. When the Medici were returned to Florence in 1512, Machiavelli was forced into retirement. In the years that followed he devoted himself to literature, producing his most famous work, The Prince. In 1527 the Medici were again expelled from Florence, but before Machiavelli was able once more to secure political office in the city he died on 22 June 1527.

NGR9781529008401
The Prince by Niccolo Machiavelli
Niccolo Machiavelli
Macmillan Collector's Library
New
Hardback
Pan Macmillan
2019-09-05
192
1529008409
9781529008401
N/A
Book picture is for illustrative purposes only, actual binding, cover or edition may vary.
This is a new book - be the first to read this copy. With untouched pages and a perfect binding, your brand new copy is ready to be opened for the first time.