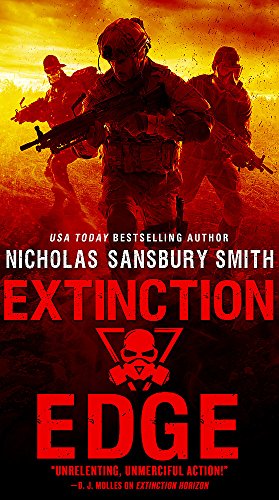 A new threat that will bring humanity to the edge of extinction...

The dust from Dr. Kate Lovato's bioweapon has settled. Projections put death counts in the billions. Her weapon was supposed to be the endgame, but it turned a small percentage of those infected with the Hemorrhage Virus into something even worse.

Survivors call them Variants. Irreversible epigenetic changes have transformed them into predators unlike any the human race has ever seen. And they are evolving.

The fractured military plans Operation Liberty - a desperate mission designed to take back the cities and destroy the Variant threat. Master Sergeant Reed Beckham agrees to lead a strike team into New York City, but first he must return to Fort Bragg to search for the only family he has left.

As Operation Liberty draws closer, Kate warns Beckham that Team Ghost won't just face their deadliest adversary yet, they may be heading into a trap...

"Extinction Horizon is a roller coaster ride of fear and adrenaline that you will not want to put down. Nicholas Sansbury Smith once again separates himself from the masses with a brilliantly entertaining post-apocalyptic thriller."
--W. J. Lundy, author of Only the Dead Live Forever on The Extinction Cycle

"It's great pulp.... The effect is something akin to watching movies like Independence Day and They Live. In other words, it's bound to be a cult classic."
--Men's Journal on Orbs

"Relentless action and danger in a gritty post-apocalyptic world where survival depends on a few brave men and women. Helldivers is one hell of a page-turner!"
--Bob Mayer, New York Times bestselling author of the Area 51 series on Helldivers

"Fast-paced military action meets cool, cutting-edge science. Extinction is no longer a Darwinian battle of the fittest. It's a race for survival."
--E. E. Giorgi, author of Chimeras on The Extinction Cycle

"An exciting new take on the end of the world and a thrilling race to survive... Sure to delight fans of survival and post-apocalyptic thrillers."
--A. G. Riddle, author of The Atlantis Gene on Helldivers

"Military SF readers and fans of The Last Ship will find enjoyment in familiar ground."
--Publishers Weekly on Helldivers

"With Extinction Horizon, Nicholas Sansbury Smith delivers unrelenting, unmerciful action to his readers, and he weaves it seamlessly with just enough scientific know-how that after each chapter you're left looking around and wondering not IF this is going to happen, but WHEN."
--D. J. Molles, author of The Remaining on Extinction Horizon

"This blood-drenched sequel to Extinction Horizon shows the perils of good intentions.... Smith is ingenious in evolving the threat and escalating the action."--Publishers Weekly on Extinction Edge
p.p1 {margin: 0.0px 0.0px 0.0px 0.0px; font: 14.0px Calibri; -webkit-text-stroke: #000000} span.s1 {font-kerning: none} "A blistering, high octane thrill ride to the brink of humanity's extinction. Nicholas Sansbury Smith plunges the reader right into the middle of the action, alongside a cast of unforgettable characters, as they fight tooth and nail to survive one impossible mission after another-to stop an extinction level virus. The Extinction Cycle series is post-apocalyptic, military science fiction at its best. Highly addictive!"--Steven Konkoly, USA Today bestselling author of The Jakarta Pandemic on The Extinction Cycle

"Smith has realized that the way to rekindle interest in zombie apocalypse fiction is to make it louder, longer, and bloodier. ... Smith intensifies the disaster efficiently as the pages flip by, and readers who enjoy juicy blood-and-guts action will find a lot of it here."--Publishers Weekly on Extinction Horizon

Nicholas Sansbury Smith is the USA Today bestselling author of Hell Divers, the Orbs trilogy, and the Extinction Cycle series. He worked for Iowa Homeland Security and Emergency Management in disaster mitigation before switching careers to focus on his one true passion-writing. When he isn't writing or daydreaming about the apocalypse, he enjoys running, biking, spending time with his family, and traveling the world. He is an Ironman triathlete and lives in Iowa with his fiancee, their dogs, and a house full of books

GOR009028200
Extinction Edge by Nicholas Sansbury Smith
Nicholas Sansbury Smith
The Extinction Cycle
Used - Very Good
Paperback
Little, Brown & Company
2017-06-15
320
0316558036
9780316558037
N/A
Book picture is for illustrative purposes only, actual binding, cover or edition may vary.
This is a used book - there is no escaping the fact it has been read by someone else and it will show signs of wear and previous use. Overall we expect it to be in very good condition, but if you are not entirely satisfied please get in touch with us.