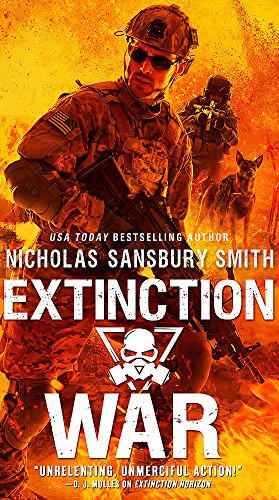 In Stock
£8.99
The final, never-before-published book in USA Today bestselling author Nicholas Sansbury Smith's propulsive post-apocalyptic series about a soldier's mission to save the world.
Very Good
Only 1 left

The final, never-before-published book in USA Today bestselling author Nicholas Sansbury Smith's propulsive post-apocalyptic series about a soldier's mission to save the world.

In Europe, Master Sergeant Joe Fitzpatrick and Team Ghost return from a mission deep into enemy territory only to find that the Variant army has grown stronger. And, they are advancing toward the EUF's final stronghold in Paris.

Back in the United States, President Ringgold and Dr. Kate Lovato are on the run. The Safe Zone Territories continue to rally behind the ROT flag, leaving Ringgold more enemies than allies. But there are still those who will stand and fight for America. Commander Rachel Davis and Captain Reed Beckham will risk everything to defeat ROT and save the country from collapsing into Civil War.

"Fast-paced military action meets cool, cutting-edge science. Extinction is no longer a Darwinian battle of the fittest. It's a race for survival."
--E. E. Giorgi, author of Chimeras on The Extinction Cycle

"Extinction Horizon is a roller coaster ride of fear and adrenaline that you will not want to put down. Nicholas Sansbury Smith once again separates himself from the masses with a brilliantly entertaining post-apocalyptic thriller."
--W. J. Lundy, author of Only the Dead Live Forever on The Extinction Cycle

"A blistering, high octane thrill ride to the brink of humanity's extinction. Nicholas Sansbury Smith plunges the reader right into the middle of the action, alongside a cast of unforgettable characters, as they fight tooth and nail to survive one impossible mission after another-to stop an extinction level virus. The Extinction Cycle series is post-apocalyptic, military science fiction at its best. Highly addictive!"--Steven Konkoly, USA Today bestselling author
"Nicholas Sansbury Smith combines plausible science with fast-paced military action in an epic juggernaut that races along at supersonic speed. Fans of the genre are sure to love it!"--Russell Blake, New York Times bestselling author on The Extinction Cycle

Nicholas Sansbury Smith is the USA Today bestselling author of Hell Divers, the Orbs trilogy, and the Extinction Cycle series. He worked for Iowa Homeland Security and Emergency Management in disaster mitigation before switching careers to focus on his one true passion-writing. When he isn't writing or daydreaming about the apocalypse, he enjoys running, biking, spending time with his family, and traveling the world. He is an Ironman triathlete and lives in Iowa with his fiancee, their dogs, and a house full of books

GOR009946432
Extinction War by Nicholas Sansbury Smith
Nicholas Sansbury Smith
The Extinction Cycle
Used - Very Good
Paperback
Little, Brown & Company
2017-11-28
320
0316558214
9780316558211
N/A
Book picture is for illustrative purposes only, actual binding, cover or edition may vary.
This is a used book - there is no escaping the fact it has been read by someone else and it will show signs of wear and previous use. Overall we expect it to be in very good condition, but if you are not entirely satisfied please get in touch with us.