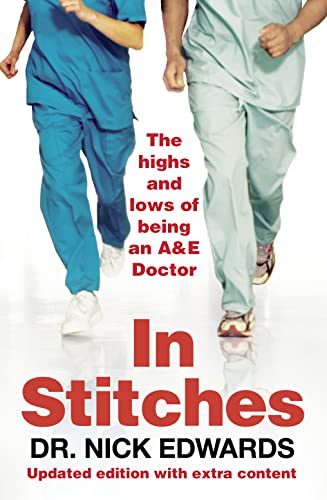 In Stitches by Nick Edwards

The true story of an A&E doctor that became a huge word-of-mouth hit - now revised and updated.

In Stitches by Nick Edwards

The true story of an A&E doctor that became a huge word-of-mouth hit - now revised and updated.

Forget what you have seen on Casualty or Holby City, this is what it is really like to be working in A&E.

Dr Nick Edwards writes with shocking honesty about life as an A&E doctor. He lifts the lid on government targets that led to poor patient care. He reveals the level of alcohol-related injuries that often bring the service to a near standstill. He shows just how bloody hard it is to look after the people who turn up at the hospital door.

But he also shares the funny side - the unusual `accidents' that result in with weird objects inserted in places they really should have ended up - and also the moving, tragic and heartbreaking.

It really is an unforgettable read.

First published in 2007 when The Friday Project was a small independent, In Stitches went on to sell over 15,000 copies in the UK, the majority of which have come in the years since then. It has proved to be a real word-of-mouth hit.

This new edition includes lots of additional material bringing Nick's story completely up to date including plenty more suprising, alarming, moving and unforgettable moments from behind the A&E curtain.

Dr Nick Edwards is an Accident and Emergency (A&E) Doctor working in the UK and a passionate believer in the NHS. However the reforms, political correctness and the Anglo-Saxon culture of binge drinking and fighting and the resulting A&E visits are a strain on his sanity. So, to keep up his morale, he began writing down his feelings a form of literary cathartic therapy the results of which make up his first book 'In stitches the highs and lows of life as an A&E doctor.'

GOR001249972
9781905548705
1905548702
In Stitches by Nick Edwards
Nick Edwards
Used - Very Good
Paperback
HarperCollins Publishers
2007-08-01
272
N/A
Book picture is for illustrative purposes only, actual binding, cover or edition may vary.
This is a used book - there is no escaping the fact it has been read by someone else and it will show signs of wear and previous use. Overall we expect it to be in very good condition, but if you are not entirely satisfied please get in touch with us
Trustpilot