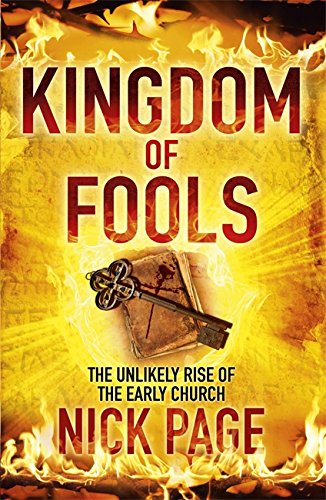 Kingdom of Fools
by Nick Page

In Stock
£6.49
The author of THE WRONG MESSIAH turns his attention to the life of the early church, digging deep into first century culture to understand why it made such an impact - and what we can learn today.
Well Read
Only 1 left

Kingdom of Fools: The Unlikely Rise of the Early Church by Nick Page

That's how the Roman world saw the first Christians. Led by fishermen, tax collectors and renegade Pharisees, the first Christians shunned power and welcomed the poor and uneducated. Roman commentators mocked their upside-down values, but the apostle Paul - himself a Roman citizen, and a Pharisee to boot, affirmed that 'God chose what is foolish in the world to shame the wise.'

Its followers were persecuted and its leaders killed, yet this ragged collection of lowly tradesmen, women, slaves - and a smattering of turncoat high-born Jews - created a movement that changed the world. How did this happen? How did the kingdom of fools conquer the mighty empire that was Rome?

In this fascinating new biography of the early church, Nick Page sets the biblical accounts alongside the latest historical and archaeological research, exploring how the early Christians lived and worshipped - and just why the Romans found this new branch of the Jewish faith so difficult to comprehend.

KINGDOM OF FOOLS is a fresh, challenging, accessible portrait of a movement so radical, so dangerous, so thrillingly different that it outlasted the empire that tried to destroy it and went on to become the driving force of our cultural development - and claims more followers today than ever before in history.

Nick Page is the author of over sixty books, including The Bible Book, What Happened to the Ark of the Covenant and Other Bible Mysteries, The HarperCollins Atlas of Bible History 'editor' and most recently, THE WRONG MESSIAH. Follow Nick Page on Twitter at: https://twitter.com/NickofEynsham and visit his website at: http://nickpage.co.uk

GOR010210998
Kingdom of Fools: The Unlikely Rise of the Early Church by Nick Page
Nick Page
Used - Well Read
Paperback
Hodder & Stoughton
2013-05-09
400
0340996269
9780340996263
N/A
Book picture is for illustrative purposes only, actual binding, cover or edition may vary.
This is a used book. We do our best to provide good quality books for you to read, but there is no escaping the fact that it has been owned and read by someone else previously. Therefore it will show signs of wear and may be an ex library book.