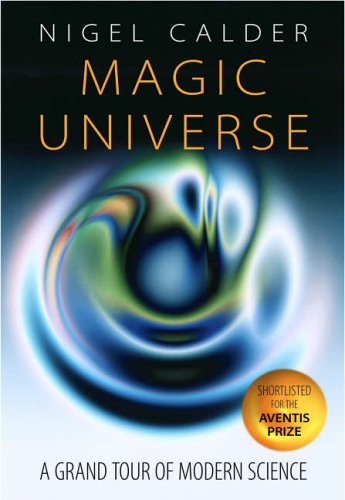 In Stock
£14.99
Bringing science to the general reader, this work offers a tour of the horizons of knowledge, from quarks to linguistics, climate change to cloning, and chaos to superstrings, presented as a set of self-contained stories. These stories are arranged as A - Z entries.
Very Good Good
Only 4 left

"Magic Universe" brings current science to the general reader in an imaginative and wholly original way. It offers an exhilarating tour of the horizons of knowledge, from quarks to linguistics, climate change to cloning, and chaos to superstrings, presented as a set of self-contained stories. The stories are arranged as A - Z entries, but this is not a conventional encyclopedia. Each story unfolds in a totally unpredictable way, seamlessly crossing disciplines, and told in engaging, accessible language. Here is a celebration of the reunion of the many subdivisions of science now in progress. 'The magic of the Universe reveals itself in the interconnections', Calder tells us. 'A repertoire of tricks let loose in the Big Bang will make you a planet or a parakeet. In some sense only dimly understood so far, the magic works for our benefit overall, whilst it amazes and puzzles us in the particulars. Natural conjuring that links comets with life, genomes with continental drift, iron ore with dementia, and particle physics with cloudiness, mocks the specialists.' The stories can be read and enjoyed in any order. Perhaps you will start with Alcohol - 'genetic revelations of when yeast invented booze'. Or Prions -'from cannibals and mad cows to new modes of heredity and evolution'. Or maybe Higgs bosons - 'the multi-billion-dollar quest for the mass-maker'. Wherever you begin - and you can begin anywhere - you can be sure of an engrossing and a surprising voyage of discovery. As Nigel Calder puts it, the best of science is romantically exciting, and also illuminating - so why trouble busy readers with anything that isn't?

Here's evidence of a steady hand, a cool nerve and a clear sense of what matters...Nigel Calder is a science writer with a superb record and immense experience...Dip and dart. Malcolm Smith, Guardian A must for every student of science, and the ideal compendium for non-scientists of any age trying to keep abreast. John Cornwell, Sunday Times In this compendium he deals seriously yet entertainingly with just about every sicientific subject you can imagine, and many that you cannot...a solid reference source for many years to come. Independent Review

Nigel Calder is the author of dozens of books on science, including Einstein's Universe, Restless Earth, Nuclear Nightmares, Spaceship Earth, and The Manic Sun. The former editor of New Scientist, he has conceived and scripted many special science documentaries for BBC Television. He lives in the United Kingdom.

INTRODUCTION: Welcome to the spider's web; OVER 130 ARTICLES, FROM..; ALCOHOL: Genetic revelations of when yeast invented booze; ALTRUISM AND AGGRESSION: Looking for the origins of those human alternatives; ANTIMATTER: Does the coat that Sakharov made really explain its absence?; ARABIDOPSIS: The modest weed that gave plant scientists the big picture; ASTRONAUTICS: Will interstellar pioneers be overtaken by their grandchildren?; BERNAL'S LADDER: Pointers; BIG BANG: The inflationary Universe's sleight-of-hand; BIODIVERSITY: The mathematics of co-existence; BIOLOGICAL CLOCKS: Molecular machinery that governs life's routines; BIOSPHERE FROM SPACE: 'I want to do the whole world'; BITS AND QUBITS: The digital world and its looming quantum shadow; BLACK HOLES: The awesome engines of quasars and active galaxies; BRAIN IMAGES: What do all the vivid movies really mean?; BRAIN RHYTHMS: The mathematics of the beat we think to; BRAIN WIRING: How do all those nerve connections know where to go?; BUCKYBALLS AND NANOTUBES: Doing very much more with very much less; ...TO..; SMALLPOX: The dairymaid's blessing and the general's curse; SOLAR WIND: How it creates the heliosphere in which we live; SPACE WEATHER: Why it is now more troublesome than in the old days; SPARTICLES: A wished-for superworld of exotic matter and forces; SPEECH: A gene that makes us more eloquent than chimpanzees; STARBURSTS: Galactic traffic accidents and stellar baby booms; STARS: Hearing them sing and sizing them up; STEM CELLS: Tissue engineering, natural and medical; SUN'S INTERIOR: How sound waves made our mother star transparent; SUPERATOMS, SUPERFLUIDS AND SUPERCONDUCTORS: The march of the boson armies; SUPERSTRINGS: Retuning the cosmic imagination; TIME MACHINES: The biggest issue in contemporary physics?; TRANSGENIC CROPS: For better or worse, a planetary experiment has begun; TREE OF LIFE: Promiscuous bacteria and the course of evolution; UNIVERSE: 'It must have known we were coming'; VOLCANIC EXPLOSIONS: Where will the next big one be?

GOR001210783
Magic Universe: The Oxford Guide to Modern Science by Nigel Calder
Nigel Calder
Used - Very Good
Hardback
Oxford University Press
2003-09-25
768
0198507925
9780198507925
N/A
Book picture is for illustrative purposes only, actual binding, cover or edition may vary.
This is a used book - there is no escaping the fact it has been read by someone else and it will show signs of wear and previous use. Overall we expect it to be in very good condition, but if you are not entirely satisfied please get in touch with us.