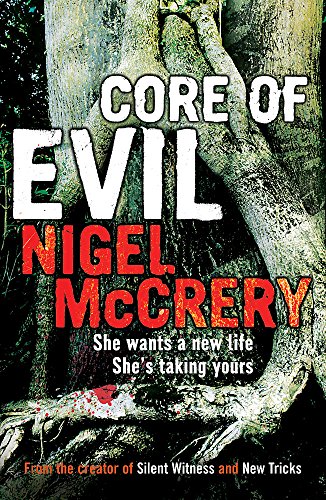 Core of Evil
by Nigel McCrery

Core of Evil by Nigel McCrery

I've looked into the eyes of women who have banged nine-inch nails into the skulls of their victims with hammers ... we evaluate them, trying to determine whether they have actually changed, or whether there's still a core of evil within them...

Before his diagnosis, DCI Mark Lapslie thought everyone was like him. Now he knows he suffers from synaethesthesia - a rare neurological condition that has cross-wired his senses. The sickening clamour of sounds he can taste has smothered his marriage and stifled his career.

At the scene of a fatal traffic accident, Lapslie's interest isn't in the recently deceased driver, rather the desiccated corpse found lying next to him. Something about the body stirs a fleeting recollection at the back of Lapslie's mind... he can't quite put his finger on it, but he can almost taste it...

Memories haunt Violet Chambers. Taking tea with her friend Daisy, she knows it's time to move on. As Daisy falls to the floor, eyes streaming, face burning, Violet calmly waits. Black hellebore is remarkably potent. It won't be long now.

Discover the other books in the DCI Mark Lapslie series: Tooth and Claw, Scream, Thirteenth Coffin and Flesh and Blood.

DCI Mark Lapslie is Nigel's finest creation . . . Immaculately constructed and beautifully observed, it cried out to be made for television * Daily Mail *
Gripping . . . a very sadistic murderer * Daily Mirror *
An excellent new detective * Daily Mail *
One of the most memorable monsters in modern crime fiction * Daily Express *
As repulsive and engaging a killer as any encountered in recent memory * Los Angeles Times *

Nigel McCrery worked as a policeman, until he left the force to become an undergraduate at Cambridge University. He has created and written some of the most successful television series of the last ten years - his credits include Silent Witness, Born & Bred, New Tricks, All the King's Men and Back-Up. He is also the author of five internationally bestselling Sam Ryan mysteries. Nigel lives in London.

GOR001269985
Core of Evil by Nigel McCrery
Nigel McCrery
DCI Mark Lapslie
Used - Very Good
Paperback
Quercus Publishing
2008-07-26
400
1847243843
9781847243843
N/A
Book picture is for illustrative purposes only, actual binding, cover or edition may vary.
This is a used book - there is no escaping the fact it has been read by someone else and it will show signs of wear and previous use. Overall we expect it to be in very good condition, but if you are not entirely satisfied please get in touch with us.