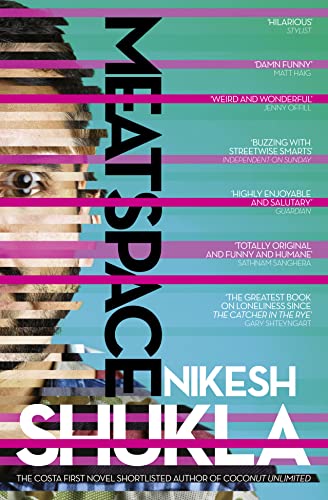 Kitab Balasubramanyam's life is falling apart around him. First he lost his girlfriend, then his job. The novel he put his all into didn't sell and he's not written anything beyond 140 characters for since. He's pushing away his widowed father, unable to listen to tales of his dad's online dating successes, and now his brother Aziz is leaving their shared flat to travel to America in search of his Facebook doppelganger.

Despite the relentless buzz of notifications on his phone, Kitab is alone. But when his only known namesake turns up in London from Bangalore, intent on being part of Kitab's life, at whatever cost, Kitab is forced to fight for the identity he thought he was so tired of.

`An anarchic, self-involved and admirably honest portrait of
a bookish life lived in the brave new digital world'
- New Statesman

`Buzzing with streetwise smarts and satirical barbs, it's a
thoughtful, often hilarious, meditation on a young writer's
loneliness in the digital age'
- Independent on Sunday

`Meatspace is funny. Damn funny. You
should really switch off your computer and read it'
- Matt Haig, author of The Humans

`Meatspace is the greatest book on loneliness since The Catcher in the Rye'
- Gary Shteyngart, author of Super Sad True Love Story

`Totally original and funny and humane'
- Sathnam Sanghera, author of The Boy with The Topknot

`Meatspace is, simply, one of the finest novels I have ever read
about modern life and modern living. Douglas
Coupland, Junot Diaz, Chuck Palahniuk and Jennifer Egan:
stick them in a blendr, and out comes this amazing new novel
by one of the UK's most distinct voices'
- James Smythe, author of The Machine

Nikesh Shukla is a writer of fiction and television and host of the Subaltern podcast. His debut novel, Coconut Unlimited was shortlisted for the Costa First Novel Award 2010 and longlisted for the Desmond Elliott Prize 2011. Meatspace is his second novel.

GOR007237566
Meatspace by Nikesh Shukla
Nikesh Shukla
Used - Very Good
Paperback
HarperCollins Publishers
2015-06-18
320
0007565070
9780007565078
N/A
Book picture is for illustrative purposes only, actual binding, cover or edition may vary.
This is a used book - there is no escaping the fact it has been read by someone else and it will show signs of wear and previous use. Overall we expect it to be in very good condition, but if you are not entirely satisfied please get in touch with us.