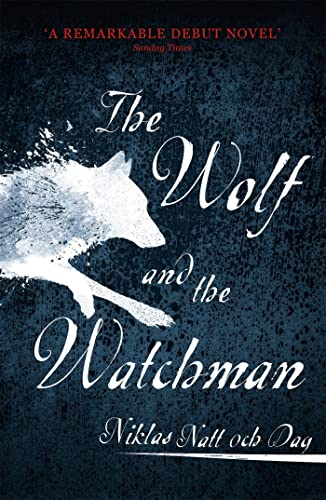 The Wolf and the Watchman
by Niklas Natt och Dag

The Wolf and the Watchman Summary

The Wolf and the Watchman: The latest Scandi sensation by Niklas Natt och Dag

'A thrilling, unnerving, clever and beautiful story. Reading it is like giving a little gift to oneself' Fredrik Backman

The year is 1793, Stockholm. King Gustav of Sweden has been assassinated, years of foreign wars have emptied the treasuries, and the realm is governed by a self-interested elite, leaving its citizens to suffer. On the streets, malcontent and paranoia abound.

A body is found in the city's swamp by a watchman, Mickel Cardell, and the case is handed over to investigator Cecil Winge, who is dying of consumption. Together, Winge and Cardell become embroiled in a brutal world of guttersnipes and thieves, mercenaries and madams, and one death will expose a city rotten with corruption beneath its powdered and painted veneer.

'An unexpected masterpiece, a wild and unusual mix of genres that in one fell swoop succeeds in renewing the entire crime fiction genre' Arne Dahl

The Wolf and the Watchman Reviews

A remarkable debut novel * Sunday Times *
A gripping, shocking read * The Times *
This gripping historical thriller surely announces the arrival of a fine new European talent. Vivid and absorbing * Observer *
The latest Scandi sensation * Sunday Times *
Niklas Natt och Dag takes the contemporary Scandinavian crime story and gives it a startlingly gruesome historical twist . . . Natt och Dag spares us nothing, detailing horror after horror in his unflinchingly muscular prose * Guardian *
Natt och Dag's description of the rattling, lung-shredding tubercular cough is truly hideous - a haunting portrait of physical disintegration that's not easy to forget * Dan Jones, Evening Standard *
Swedish noir doesn't get much darker * Herald *
A superbly detailed historical mystery * Irish Times *
A well-depicted historical murder mystery filled with cruelty as well as warmth and humanity * Best Debut, Swedish Academy of Crime Writers' Award 2017 *
A historical thriller that is unparalleled in suspense and literary quality. It's raw, beautiful, heartbreaking and extremely captivating until the very last page. The Wolf and the Watchman deserves a place among the classics of the genre * Erik Axl Sund, author of The Crow Girl *
An unexpected masterpiece, a wild and unusual mix of genres that in one fell swoop succeeds in renewing the entire crime fiction genre * Arne Dahl, prize-winning and Swedish #1 bestselling author of the Sam Berger series *
Brawny, bloody, intricate, enthralling - and the best historical thriller I've read in twenty years * A J Finn, #1 bestselling author of The Woman in the Window *
This is a thrilling, unnerving, clever and beautiful story. Reading it is like giving a little gift to oneself * Fredrik Backman *
An impressive thriller - well paced, well structured and deeply unsettling . . . political scheming and psychological angst, grand theories on the state of man, a fiendish masterplan and a love story all in one * TLS *

Niklas Natt och Dag is a member of the oldest surviving noble family in Sweden. His ancestors were responsible for the murder of the rebel Engelbrekt in 1436, commanded the army that lost Stockholm to the Danes in 1520, and were forced into exile after having demanded the abdication of Charles XIV in 1810. His surname, Natt och Dag, translates into Night and Day - the origin of this slightly unusual name is the family crest, a shield split horizontally in gold and blue.

GOR010229096
The Wolf and the Watchman: The latest Scandi sensation by Niklas Natt och Dag
Niklas Natt och Dag
Used - Like New
Paperback
John Murray Press
2019-10-03
416
1473682142
9781473682146
Winner of Swedish Academy of Crime Writer's Award for Best Swedish Crime Novel 2017 (UK)
Book picture is for illustrative purposes only, actual binding, cover or edition may vary.
This is a used book - there is no escaping the fact it has been read by someone else and it will show signs of wear and previous use. Overall we expect it to be in very good condition, but if you are not entirely satisfied please get in touch with us.