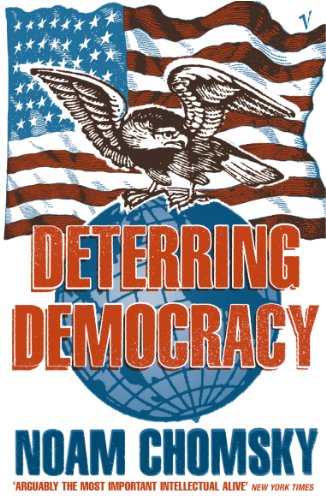 Out of Stock
From World War II until the 1980s, the United States reigned supreme as both the economic and the military leader of the world.
Like New
Only 0 left

From World War II until the 1980s, the United States reigned supreme as both the economic and the military leader of the world. The major shifts in global politics that came about with the dismantling of the Eastern Bloc have left the United States unchallenged as the pre-eminent military power, but American economic might has declined drastically in the face of competition, first from Germany and Japan and more recently from the newly prosperous countries elsewhere. In this book, Noam Chomsky points to the potentially catastrophic consequences of this imbalance. He reveals a world in which the United States exploits its advantage ruthlessly to enforce its national interests - and in the process destroys weaker nations. Deterring Democracy offers a devastating analysis of American Imperialism, drawing alarming connections between its repression of information inside the US and its aggressive empire-building abroad.

"Offers a revelatory portrait of the US empire of the 1980s and '90s, an ugly side of America largely kept hidden from the public by a complacent media" * Publishers Weekly *
"Shows how large the gap is between the realities of today's world and the picture of it that is presented to the American public" * Observer *
"Arguably the most important intellectual alive" * New York Times *
"It's the truth. Noam really has the goods on those guys in America" -- Robert Crumb * Guardian *

Noam Chomsky is Institute Professor in the Department of Linguistics and Philosophy at the Massachusetts Institute of Technology, Boston. A member of the American Academy of Science, he has published widely in both linguistics and current affairs. His previous books include At War with Asia, American Power and the New Mandarins, For Reasons of State, Peace in the Middle East?, Towards a New Cold War, Fateful Triangle: The U.S., Israel and the Palestinians, Pirates and Emperors, The Culture of Terrorism, Manufacturing Consent (with E. S. Herman), and Necessary Illusions.

GOR010536255
Deterring Democracy by Noam Chomsky
Noam Chomsky
Used - Like New
Paperback
Vintage Publishing
1992-04-16
464
0099135019
9780099135012
N/A
Book picture is for illustrative purposes only, actual binding, cover or edition may vary.
The book has been read, but looks new. The book cover has no visible wear, and the dust jacket is included if applicable. No missing or damaged pages, no tears, possible very minimal creasing, no underlining or highlighting of text, and no writing in the margins.