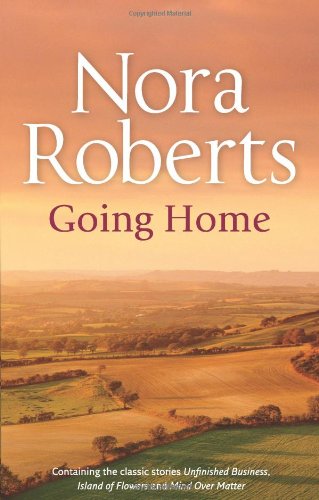 Three women must rediscover the love of family before they can give their hearts to others...

Three women must rediscover the love of family before they can give their hearts to others...

She wanted answers from her estranged mother and went home to find them. But Vanessa Sexton also found Brady Tucker, the man who'd once broken her heart ... and still left her breathless.

Innocent Laine Simmons hardly expected the father she barely knew to welcome her. However, she was completely unprepared for the suspicion of her father's sexy partner Dillon O'Brian - or for his intense passion.

Protecting her mother's interests pitted no-nonsense agent Aurora Fields against ruthlessly determined David Brady. But there were few David couldn't charm if he set his mind to it - and this time it really mattered.

GOR003616366
Going Home: Unfinished Business / Island of Flowers / Mind Over Matter by Nora Roberts
Nora Roberts
Used - Very Good
Paperback
HarperCollins Publishers
2011-02-14
656
0263889742
9780263889741
N/A
Book picture is for illustrative purposes only, actual binding, cover or edition may vary.
This is a used book - there is no escaping the fact it has been read by someone else and it will show signs of wear and previous use. Overall we expect it to be in very good condition, but if you are not entirely satisfied please get in touch with us.