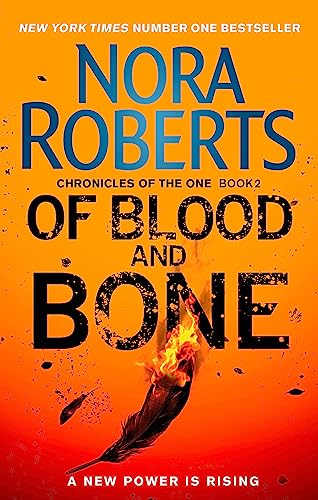 Of Blood and Bone by Nora Roberts

The gripping sequel to New York Times number one bestseller Year One - an epic story of love, war, family and magic.

Of Blood and Bone by Nora Roberts

Thirteen years ago, a catastrophic pandemic known as The Doom killed billions.

For those left behind, it is a chance to build a new world. But The Doom was no ordinary virus. In some survivors, it awoke strange powers - to heal, to harm, even to predict the future.

Fallon Swift has no memories of the old world - but she is destined to shape this new one. Growing up with her three brothers on a quiet farm, she has been protected from danger by her mother and stepfather.

Now she must leave them, and learn to fight. Because Fallon is not only a powerful 'Uncanny' - she also has a pivotal role to play in the bloody battles ahead. A war between good and evil is brewing, and Fallon - young, tough, headstrong - must be ready.

A sequel to the number one bestselling Year One, this breathtaking novel of love, war, family and magic is a gripping and deeply satisfying continuation of an extraordinary new trilogy.

Though it's the middle book in a planned trilogy, this can be read on its own and will appeal to fans of fast-paced dystopian tales with a strong heroine * Publishers Weekly *
Nora Roberts is the number one New York Times bestseller of more than 200 novels. With over 500 million copies of her books in print, she is indisputably one of the most celebrated and popular writers in the world. She is both a Sunday Times bestseller in the UK and a number one bestseller in Australia.
GOR010165890
9780349415000
0349415005
Of Blood and Bone by Nora Roberts
Nora Roberts
Chronicles of The One
Used - Very Good
Paperback
Little, Brown Book Group
2019-10-08
512
N/A
Book picture is for illustrative purposes only, actual binding, cover or edition may vary.
This is a used book - there is no escaping the fact it has been read by someone else and it will show signs of wear and previous use. Overall we expect it to be in very good condition, but if you are not entirely satisfied please get in touch with us
Trustpilot