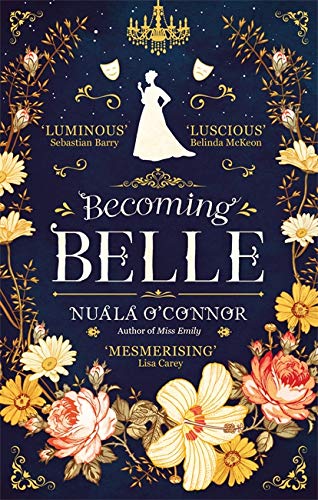 In 1887, Isabel Bilton is the eldest of three daughters of a middle-class military family, growing up in a small garrison town. By 1891 she is the Countess of Clancarty, dubbed "the peasant countess" by the press, and a member of the Irish aristocracy. Becoming Belle is the story of the four years in between, of Belle's rapid ascent and the people that tried to tear her down.

Reimagined by a novelist at the height of her powers, Belle is an unforgettable woman. Set against an absorbing portrait of Victorian London, hers is a timeless rags-to-riches story a la Becky Sharpe.
_________

'Nuala O'Connor has the thrilling ability to step back nimbly and enter the deep dance of time. This is a hidden history laid luminously before us of an exultant Anglo-Irish woman navigating the dark shoals and the bright fields of a life' SEBASTIAN BARRY, award-winning author of The Secret Scripture and Days Without End

'Becoming Belle is so mesmerizing you will be distraught when it ends.O'Connor has resurrected a fiery, inexorable woman who rewrites the script on a stage supposedly ruled by men. Sensual, witty, daring, and unapologetically forward.' Lisa Carey, author of The Stolen Child

'Masterful storytelling! I was putty in Nuala O'Connor's hands. She made the unsinkable Belle Bilton and her down-to-earth sister Flo real to me, and brought 1880's London to my living room. Encore! Encore!' Lynn Cullen, bestselling author of Mrs. Poe

'A glorious novel in which Belle Bilton and 19th century London are brought roaring to life with exquisite period detail' Hazel Gaynor, New York Times bestselling author of A Memory of Violets

'Thrillingly dramatic and achingly moving and profoundly resonant into this present era' Robert Olen Butler, author of A Good Scent from a Strange Mountain

'O'Connor gently unfolds Belle's tale in a manner that is compelling and disarming. The ambience may be Victorian elegance but the sheer honesty of O'Connor's writing is sensual, authentic and earthy. A delight!' Rose Servitova, author of The Longbourn Letters

Nuala O'Connor (aka Nuala Ni Chonchuir) was born in Dublin, Ireland, she lives in East Galway. Her fifth short story collection Joyride to Jupiter was published by New Island in 2017; her story 'Consolata' from that collection was shortlisted for Short Story of the Year at the 2017 Irish Book Awards.

Nuala's third novel, Miss Emily, about the poet Emily Dickinson and her Irish maid, was shortlisted for the Eason Book Club Novel of the Year 2015 and longlisted for the 2017 International DUBLIN Literary Award.

Nuala's fourth novel, Becoming Belle, will be published in August 2018.

GOR010195443
Becoming Belle by Nuala O'Connor
Nuala O'Connor
Used - Like New
Paperback
Unknown
0
0349421269
9780349421261
N/A
Book picture is for illustrative purposes only, actual binding, cover or edition may vary.
This is a used book - there is no escaping the fact it has been read by someone else and it will show signs of wear and previous use. Overall we expect it to be in very good condition, but if you are not entirely satisfied please get in touch with us.