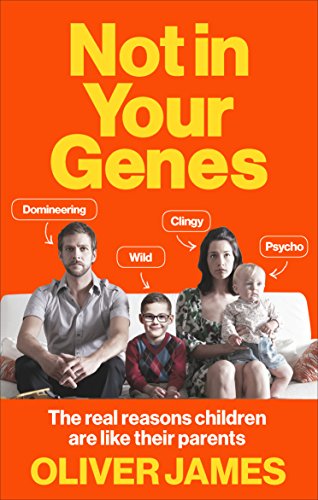 Not In Your Genes
by Oliver James

In Stock
£3.29
Professor Robert Plomin, the world's leading geneticist, said in 2014 of his search for genes that explain differences in our psychology: `I have been looking for these genes for fifteen years.
Very Good
Only 3 left

Not In Your Genes Summary

Not In Your Genes: The real reasons children are like their parents by Oliver James

Professor Robert Plomin, the world's leading geneticist, said in 2014 of his search for genes that explain differences in our psychology: `I have been looking for these genes for fifteen years. I don't have any'. Using a mixture of famous and ordinary people, Oliver James drills deep down into the childhood causes of our individuality, revealing why our upbringing, not our genes, plays such an important role in our wellbeing and success. The implications are huge: as adults we can change, we can clutch our fates from predetermined destiny, as parents we can radically alter the trajectory of our childrens' lives, and as a society we could largely eradicate criminality and poverty. Not in Your Genes will not only change the way you think about yourself and the people around you, but give you the fuel to change your personality and your life for the better.

Not In Your Genes Reviews

"Radical but full of hope ... we really can choose our mental health and that of our children" * Steve Biddulph, bestselling author of Raising Boys *
"the nation's shrink" * The Times *
"James is charting the new frontiers in psychology" * Guardian *

Oliver James trained and practised as a child clinical psychologist and, since 1987, has worked as a writer, journalist and television documentary producer and presenter. His books include Juvenile Violence in a Winner-Loser Culture, the bestselling They F*** You Up and Britain on the Couch, which was also a successful documentary series for Channel 4. He is a trustee of two children's charities: the National Family and Parenting Institute and Homestart.

GOR008610820
Not In Your Genes: The real reasons children are like their parents by Oliver James
Oliver James
Used - Very Good
Paperback
Ebury Publishing
2017-05-04
352
0091947685
9780091947682
N/A
Book picture is for illustrative purposes only, actual binding, cover or edition may vary.
This is a used book - there is no escaping the fact it has been read by someone else and it will show signs of wear and previous use. Overall we expect it to be in very good condition, but if you are not entirely satisfied please get in touch with us.