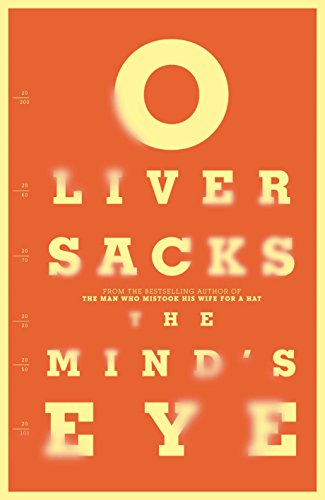 The Mind's Eye
by Oliver Sacks

Out of Stock
The bestselling author of The Man Who Mistook His Wife for a Hat describes how we experience the visual world.
Very Good
Only 0 left

The Mind's Eye by Oliver Sacks

In The Mind's Eye, Oliver Sacks tells the stories of people who are able to navigate the world and communicate with others despite losing what many of us consider indispensable senses and abilities: the power of speech, the capacity to recognize faces, the sense of three-dimensional space, the ability to read, the sense of sight. For all of these people, the challenge is to adapt to a radically new way of being in the world.

There is Lilian, a concert pianist who becomes unable to read music and eventually even to recognize everyday objects; and Sue, a neurobiologist who has never seen in three dimensions, until she suddenly acquires stereoscopic vision in her fifties.

There is Pat, who, after years of isolation, reinvents herself as an outgoing and highly social member of her community, although she has aphasia and cannot utter a sentence; and Howard, a prolific novelist who must find a way to continue his life as a writer even after a stroke destroys his ability to read.

And there is Dr Sacks himself, who tells the story of his own eye cancer and the bizarre and disconcerting effects of losing vision to one side.

Sacks explores here some very strange paradoxes - people who can see perfectly but not recognize their own children, blind people who become hyper-visual, or who navigate by `tongue vision'. Along the way, he considers more fundamental questions: How do we see? How do we think? How important is internal imagery - or vision, for that matter? Why is it that, although writing is only five thousand years old, humans have a universal, seemingly innate, potential for reading?

The Mind's Eye is a testament to the complexity of vision and the brain and to the power of creativity and adaptation. And it provides a whole new perspective on the power of language and communication, as we try to imagine what it is to see with another person's eyes, or another person's mind.

Oliver Sacks was born in 1933 in London and was educated at Queen's College, Oxford. He completed his medical training at San Francisco's Mount Zion Hospital and at UCLA before moving to New York, where he soon encountered the patients whom he would write about in his book Awakenings. Dr Sacks spent almost fifty years working as a neurologist and wrote many books, including The Man Who Mistook His Wife for a Hat, Musicophilia, and Hallucinations, about the strange neurological predicaments and conditions of his patients. The New York Times referred to him as 'the poet laureate of medicine', and over the years he received many awards, including honours from the Guggenheim Foundation, the National Science Foundation, the American Academy of Arts and Letters, and the Royal College of Physicians. In 2008, he was appointed Commander of the British Empire. His memoir, On the Move, was published shortly before his death in August 2015.

GOR002802393
The Mind's Eye by Oliver Sacks
Oliver Sacks
Used - Very Good
Hardback
Pan Macmillan
2010-11-05
272
033050889X
9780330508896
N/A
Book picture is for illustrative purposes only, actual binding, cover or edition may vary.
This is a used book - there is no escaping the fact it has been read by someone else and it will show signs of wear and previous use. Overall we expect it to be in very good condition, but if you are not entirely satisfied please get in touch with us.