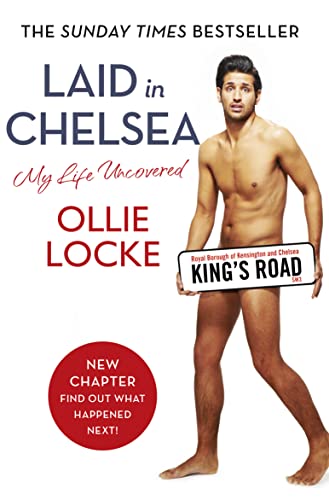 Laid in Chelsea by Ollie Locke

Pour the champagne, light some candles, lay back and prepare to laugh, cry and gasp at the fully uncensored, Bridget-Jones-esque world of Ollie Locke, star of Made in Chelsea.

Laid in Chelsea: My Life Uncovered by Ollie Locke

Pour the champagne, light some candles, lay back and prepare to laugh, cry and gasp at the fully uncensored, Bridget-Jones-esque world of Ollie Locke, star of Made in Chelsea.

Immaculately dressed, fake-tanned and unstoppably cheerful, Ollie Locke is the heart of Channel 4's hit show Made in Chelsea. He's done it all. And what he hasn't done, he's seen. (Not in a weird way, obvs.)

In a nutshell, that means one hell of a rollercoaster ride of trouble, misadventures, sexual mishaps, epic cringes and embarrassing secrets that nobody was ever supposed to know. Until now.

Because in Laid in Chelsea Ollie - famously unlucky in love - is letting it all hang out. So to speak.

From developing his first crush, dire first encounters, terrible dates to true love - as well as offering his unique advice on how to stay sane in the crazy world of love - Ollie's laying it bare. And, of course, he reveals what really goes on behind the bedroom doors of Made in Chelsea...

Witty, surprising, touching, downright hilarious and always honest, Laid in Chelsea is an exclusive insight into the mind of the modern man, and a backstage pass to the secret world of Chelsea.

`Touching and hilariously funny... you'll enjoy every single page of this... light-hearted, honest and brilliant fun - this is a must-read for MIC fans' **** Heat

Ollie Locke grew up in Southampton and attended several boarding schools around the country. Aged 19 he moved to London to work as a writer, and later fashion editor, of an independent magazine in Chelsea.

A few months later Ollie went on to take the King's Road club scene by storm, working in nine nightclubs over a five-year period. Then Made in Chelsea came calling in 2011, so Ollie left the glamorous world of vomiting toffs behind - and is now one of the most recognizable faces on British TV.

GOR005178074
9780007513963
0007513968
Laid in Chelsea: My Life Uncovered by Ollie Locke
Ollie Locke
Used - Very Good
Paperback
HarperCollins Publishers
2013-10-10
320
N/A
Book picture is for illustrative purposes only, actual binding, cover or edition may vary.
This is a used book - there is no escaping the fact it has been read by someone else and it will show signs of wear and previous use. Overall we expect it to be in very good condition, but if you are not entirely satisfied please get in touch with us
Trustpilot