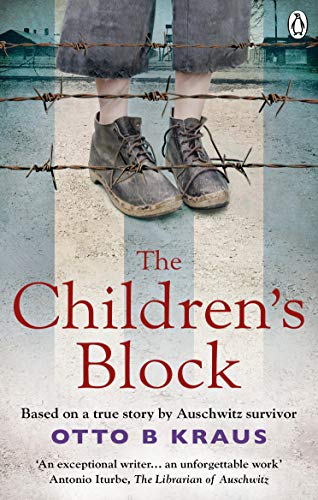 The Children's Block
by Otto B Kraus

Originally published as THE PAINTED WALL, Otto Kraus's autobiographical novel, tells the true story of 500 Jewish children who lived in the Czech Family Camp in Auschwitz-Birkenau between September 1943 and June 1944.

The Children's Block: Based on a true story by an Auschwitz survivor by Otto B Kraus

'We lived on a bunk built for four but in times of overcrowding, it slept seven and at times even eight. There was so little space on the berth that when one of us wanted to ease his hip, we all had to turn in a tangle of legs and chests and hollow bellies as if we were one many-limbed creature, a Hindu god or a centipede. We grow intimate not only in body but also in mind because we knew that though we were not born of one womb, we would certainly die together.'

Alex Ehren is a poet, a prisoner and a teacher in block 31 in Auschwitz-Birkenau, the children's block. He spends his days trying to survive while illegally giving lessons to his young charges while shielding them as best he can from the impossible horrors of the camp. But trying to teach the children is not the only illicit activity that Alex is involved in. Alex is keeping a diary...

Originally published as THE PAINTED WALL, Otto Kraus's autobiographical novel, tells the true story of 500 Jewish children who lived in the Czech Family Camp in Auschwitz-Birkenau between September 1943 and June 1944.

'Otto B Kraus brings together the strength of his own personal experience in the tiny barracks-school immersed in the darkness of Auschwitz with the story telling powers of an exceptional writer...He will from now on occupy the important place he deserves among writers of the twentieth century' * ANTONIO ITURBE, bestselling author of THE LIBRARIAN OF AUSCHWITZ *
I read Ota Kraus' manuscript and am impressed. Yes, it deserves to be published. * ELI WIESEL, author of NIGHT *

About Otto B Kraus

Otto B Kraus was born 1st September 1921 in Prague, Czechoslovakia. He and his family were deported in May 1942 to Ghetto Terezin and from there to Auschwitz where Otto became one of the children's counsellors on the Kinderblock. Their camp was liquidated after six months. The able-bodied inmates were selected by the notorious Dr Mengele and sent to forced labour in Germany, the rest - more than 7000 people including mothers with young children, the weak and the elderly - were killed in the gas chambers. Otto was among the 1000 men sent to the concentration camp Schwarzheide-Sachsenhausen in Germany.

After the war, Otto returned to Prague where he learned that neither his parents, nor his brother had survived. He enrolled at the university to study Literature, Philosophy, English and Spanish. He received a modest grant and started to rebuild his life. He met Dita by chance and remembered her as one of the youths on the Kinderblock in Auschwitz and they became friends. They were married in 1947 and in 1949 they emigrated to Israel where they lived at first in a kibbutz and later moved to the Youth Village Hadassim where Otto taught English. Dita and Otto raised two sons and a daughter. Otto died on the 5th October 2000, at home, surrounded by his family.

GOR010054597
The Children's Block: Based on a true story by an Auschwitz survivor by Otto B Kraus
Otto B Kraus
Used - Very Good
Paperback
Ebury Publishing
2019-10-15
288
1529105560
9781529105568
N/A
Book picture is for illustrative purposes only, actual binding, cover or edition may vary.
This is a used book - there is no escaping the fact it has been read by someone else and it will show signs of wear and previous use. Overall we expect it to be in very good condition, but if you are not entirely satisfied please get in touch with us.