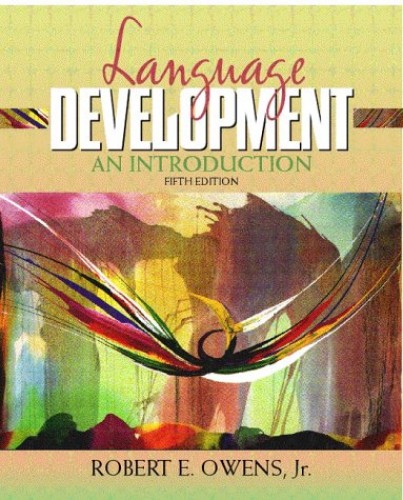 Language Development: An Introduction by Owens

In recognition of the tremendous variation across children and language, the fifth edition of this highly readable text devotes much more space to individual developmental differences and cultural differences. Discussion of other cultures has been included in the text wherever possible. In addition, the sections on bidialectalism and bilingualism have been expanded to reflect more accurately the realities of everyday life in the United States. Developed within a practical chronological framework, every aspect of syntax, morphology, semantics, phonology, and pragmatics is examined. As in previous editions, Owens presents even the most complex, technical concepts at an appropriate level for beginning students.

All chapters begin with "Chapter Objectives" and conclude with "Conclusion," "Discussions," and "Reflections."

6. The Social and Communicative Bases of Early Language.
Development of Communication: A Chronology.Maternal Communication Behaviors.Interactions between Infant and Caregiver.

GOR005553241
Language Development: An Introduction by Owens
Owens
Used - Very Good
Paperback
Pearson Education (US)
2000-07-26
542
0205319262
9780205319268
N/A
Book picture is for illustrative purposes only, actual binding, cover or edition may vary.
This is a used book - there is no escaping the fact it has been read by someone else and it will show signs of wear and previous use. Overall we expect it to be in very good condition, but if you are not entirely satisfied please get in touch with us.