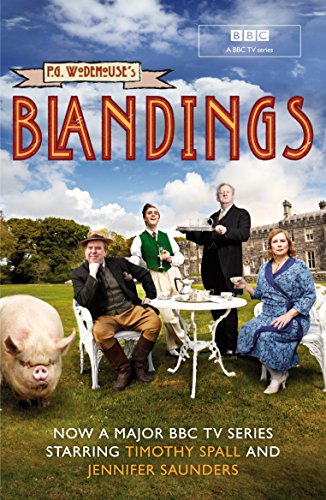 NOW A MAJOR BBC DRAMA STARRING TIMOTHY SPALL, DAVID WALLIAMS AND JENNIFER SAUNDERS Published to coincide with the star-filled BBC production of Blandings, this superb new anthology sees these celebrated stories together for the first time. Set in the delightfully dysfunctional mess of Blandings Castle these 6 gems follow the trials of poor Earl Emsworth and his beloved pig Empress as they clash with a panoply of friends and family, servants and spongers, bookies and hucksters. And all served up with great lashings of comedy from that rarest of geniuses: P.G. Wodehouse.

"Sublime comic genius" -- Ben Elton
"You don't analyse such sunlit perfection, you just bask in its warmth and splendour." -- Stephen Fry
"The funniest writer ever to put words to paper." -- Hugh Laurie
"For as long as I'm immersed in a P.G. Wodehouse book, it's possible to keep the real world at bay and live in a far, far nicer, funnier one where happy endings are the order of the day." -- Marian Keyes
"P.G. Wodehouse wrote the best English comic novels of the century." -- Sebastian Faulks

GOR004417901
Blandings: TV Tie-In by P. G. Wodehouse
P. G. Wodehouse
Used - Very Good
Paperback
Cornerstone
2012-10-15
400
0099580691
9780099580690
N/A
Book picture is for illustrative purposes only, actual binding, cover or edition may vary.
This is a used book - there is no escaping the fact it has been read by someone else and it will show signs of wear and previous use. Overall we expect it to be in very good condition, but if you are not entirely satisfied please get in touch with us.